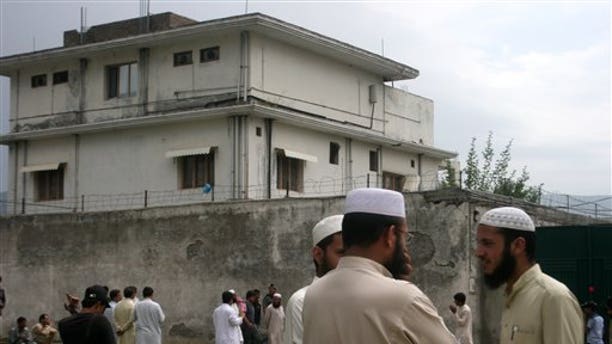 In this May 5, 2011 file photo, local residents and media are seen outside the house where Al Qaeda leader Usama bin Laden was caught and killed in Abbottabad, Pakistan. The courier who led U.S. intelligence to bin Laden's hideout in Pakistan hailed from the Swat Valley, a one-time stronghold of militant Taliban fighters, Pakistani officials said. (AP/File) (AP2011)

The courier who led U.S. intelligence to Usama bin Laden's hideout in Pakistan hailed from the Swat Valley, a one-time stronghold of militant Taliban fighters, Pakistani officials said on Wednesday.

The officials identified the courier as Ibrahim Saeed Ahmed. He and his brother Abrar were shot dead in the daring U.S. Navy SEAL raid May 2 that also killed bin Laden and two other people.

The brothers apparently linked up with bin Laden after they returned to Swat Valley from Kuwait, where their parents had immigrated.

Swat is about 70 miles north of the city of Abbottabad, where bin Laden had been hiding for about five years. The Wall Street Journal, which first reported the real names of the two brothers, said they were from the Swat village of Martung.

The U.S. commando attack, conducted without notification of Pakistani officials, was a huge embarrassment for the country given that bin Laden's compound was in a military garrison city and only about 35 miles from the capital Islamabad.

Pakistan has denied suspicions of involvement in sheltering bin Laden and set up an independent commission to probe possible links and intelligence failures. Among the challenges is trying to determine whether bin Laden's support network spread beyond the brothers.

"I am sure he could not have lived without a local network. He had to get messages out. The kind of help that he needed to be there meant he had help from somewhere, some groups maybe," a senior Pakistani intelligence official said on Wednesday on the usual condition that his name not be used.

"Every possible link is being looked into," he said. He flatly denied involvement of the Pakistani intelligence agency known by its acronym ISI. While the U.S. administration has publicly said there is no evidence that anyone in a position of leadership harbored bin Laden, they have not ruled out lower level assistance.

The CIA first learned Ahmed's nom de guerre in 2002 from a detainee being held by another country and wouldn't learn his real name until years later.

Ahmed, who is said to be in his early 30s, was a protege of Khalid Sheikh Mohammed, the Sept. 11 mastermind, and a close associate of Faraj al-Libi, a top Al Qaeda operative captured in 2005 about 12 miles from Abbottabad.

Both Mohammed and al-Libi lied about their association with Ahmed while being held in CIA secret prisons. But a top Al Qaeda operative named Hassan Ghul also in CIA custody helped the agency connect the dots: Finding Ahmed, who had been identified as someone important, could lead to bin Laden.

The captives said the courier was known by the nom de guerre Abu Ahmed al-Kuwaiti, which he adopted because their parents lived in Kuwait.

But U.S. intelligence only found the courier last August, through a chance interception of Ahmed's phone call. That set in motion the secret CIA search of the Abbottabad region, culminating with the May 2 raid and bin Laden's killing.

President Barack Obama's decision to keep Pakistan in the dark about the raid, infuriated the military and its intelligence agency. Relations sank to new lows.

The U.S., however, has warned it will do the same again if it has solid intelligence on the whereabouts of any of five most-wanted figures.

Topping that list is Ayman al-Zawahri, Al Qaeda's No. 2. Others are: Libyan Attiya Abdul Rahman, believed to be an operational chief; Pakistani Illyas Kashmiri, on whom the U.S. place a $5 million bounty last month; Sirajuddin Haqqani, the military chief of the Taliban-allied Haqqani network and son of its leader Jalaluddin Haqqani; and the Taliban's reclusive leader Mullah Mohammad Omar.

The list was handed to Pakistani authorities during a hurried visit last Friday by U.S. Secretary of State Hillary Rodham Clinton and Joint Chiefs of Staff Chairman Adm. Mike Mullen. They warned then that they would again go it alone if they discovered the location of any of the five.

Pakistan's ISI made a slight overture to the CIA by allowing access to bin Laden's compound last week.

"It was a gesture to say let's start to patch things up," he said.

"We don't want this relationship to end," he said, but another raid like the one on May 2 "may be the straw that breaks the camel's back."