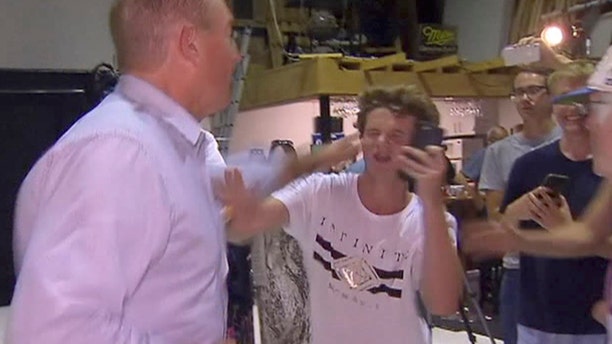 In this image made from video, Senator Fraser Anning swipes at a teenager who broke an egg on his head while he was holding a press conference, Saturday, March 16, 2019, in Melbourne, New Zealand. Following the mass shootings on Friday, Anning came under sharp criticism over tweets including one that said: “Does anyone still dispute the link between Muslim immigration and violence?” (AP Photo)

An Australian teenager who gained notoriety for cracking an egg on the head of a senator from his homeland who disparaged Muslims after the massacre at two New Zealand mosques Friday said he is donating most of the more than $50,000 in his GoFundMe page to victims of the tragedy, according to published reports.

Will Connolly, who is 17, made global headlines after he broke the raw egg on the head of Australian Senator Fraser Anning, who blamed the mass killing by Australian suspect Brenton Harrison Tarrant on New Zealand's immigration policies.

After the massacre, Anning, known for his controversial comments about immigration, immediately began tweeting and releasing statements disparaging Muslims.

He tweeted: "Does anyone still dispute the link between Muslim immigration and violence?”

And in a statement, Anning said: “The real cause of bloodshed on New Zealand streets today is the immigration program which allowed Muslim fanatics to migrate to New Zealand in the first place.”

Anning was in Melbourne speaking to reporters on Saturday when Connolly walked up behind him and cracked the egg on the politician’s head.

Anning punched Connolly and the politician’s supporters grabbed the teenager, holding him down on the floor until the police arrived.

The video of the incident went viral on social media, with many people hailing the “Egg Boy” a hero, and some saying that violence at the massacre was not to be addressed with more violence. An artist painted a mural of the incident to honor the teen, and musicians have offered Connolly free concert tickets. T-shirts bearing the image of Connolly’s face are for sale.

Others say that to praise Connolly is to support violence.

“I would have knocked that kid cold,” he wrote.

Police released Connolly without charge. But a GoFundMe page with a goal of $50,000 had been set up to cover any legal fees Connolly might have faced.

After his release, Connolly tweeted: “Don't egg politicians. You get tackled by 30 bogans at the same time. I learnt the hard way.”

And he noted: “This was the moment I felt so proud to exist as a human being. Let me inform all you guys, Muslims are not terrorists and terrorism has no religion. All those who consider Muslims a terrorist community have empty heads like Anning.”

And Australian Prime Minister Scott Morrison said Anning should feel “the full force of the law” for assaulting Connolly after being egged.

On Sunday, Anning remained defiant, saying he would not apologize for his comments or actions.

"I don't regret anything I do," he said regarding striking Connolly, according to the New Zealand Herald. "I defended myself, that's what Australians do, usually, they defend themselves."

Anning added: "He got a slap across the face which is what his mother should have given him a long time ago because he's been misbehaving badly."

The police released a statement saying the entire matter, including the actions by Connolly and Anning, is under investigation.

“The incident is being actively investigated by Victoria Police in its entirety,” the statement said.