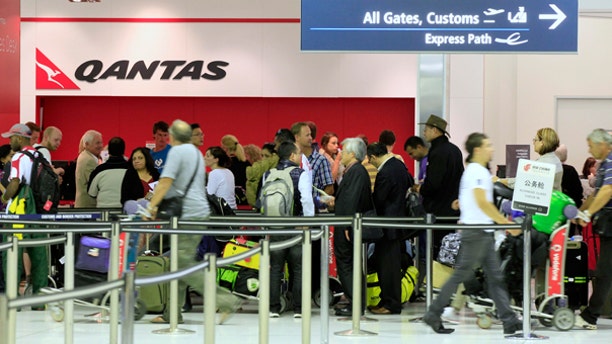 Qantas Airways grounded its global fleet indefinitely and locked out workers Saturday after weeks of disruptive strikes, and the disappointed Australian government was seeking emergency arbitration to end the strikes.

Flights in the air continued to their destinations, but others were stopped even taxiing on the runway, according to one flier. Booked passengers were being rescheduled at Qantas' expense, chief executive Alan Joyce said.

Bookings already had collapsed after unions warned travelers to book with other airlines through the busy Christmas-New Year period, and Joyce told a news conference in Sydney the unions' actions have caused a crisis for Qantas.

"They are trashing our strategy and our brand," Joyce said. "They are deliberately destabilizing the company and there is no end in sight."

The grounding of the largest of Australia's four national domestic airlines will take a major economic toll and could disrupt the national Parliament, due to resume in Canberra on Tuesday after a two-week recess. Qantas' budget subsidiary Jetstar continues to fly.

British tourist Chris Crulley, 25, said the pilot on his Qantas flight informed passengers while taxiing down a Sydney runway that he had to return to the terminal "to take an important phone call." The flight was then grounded.

"We're all set for the flight and settled in and the next thing -- I'm stunned. We're getting back off the plane," the firefighter told The Associated Press from Sydney Airport by phone.

Crulley was happy to be heading home to Newcastle after a five-week vacation when his flight was interrupted. "I've got to get back to the other side of the world by Wednesday for work. It's a nightmare," he added.

Qantas offered him up to 350 Australian dollars ($375) a day for food and accommodation, but Crulley expected to struggle to find a hotel at short notice in Sydney on a Saturday night.

The government has called an emergency arbitration court hearing on Saturday night to rule on the strike action and the airline's response.

Prime Minister Julia Gillard said her center-left government, which is affiliated with the trade union movement, had "taken a rare decision" to call an emergency arbitration court hearing on Saturday night to terminate the strike action.

"I believe it is warranted in the circumstances we now face with Qantas ... circumstances with this industrial dispute that could have implications for our national economy," Gillard told reporters.

Transport Minister Anthony Albanese described the grounding as "disappointing" and "extraordinary." Albanese was angry that Qantas gave him only three hours' notice.

All 108 aircraft in as many as 22 countries will be grounded until unions representing pilots, mechanics, baggage handlers and caterers reach agreements with Qantas over pay and conditions, Joyce said.

"We are locking out until the unions withdraw their extreme claim and reach agreement with us," Joyce said, referring shutting staff out of their work stations.

"This is a crisis for Qantas. If the action continues as the unions have promised, we will have no choice but to close down Qantas part by part," he added.

Staff will not be paid starting Monday, and Joyce estimated the grounding will cost the airline $20 million a day. It already had reduced and rescheduled flights for weeks because of strikes and overtime bans as workers worry their jobs will move overseas.

Richard Woodward, vice president of the pilot's union, the Australian and International Pilots Association, accused Qantas of "holding a knife to the nation's throat" and said Joyce had "gone mad."

In mid-October, Qantas grounded five jets and reduced domestic flights by almost 100 flights a week because aircraft mechanics had reduced the hours they were prepared to work.

Qantas infuriated unions in August when it said it would improve its loss-making overseas business by creating an Asia-based airline with its own name and brand.

Qantas is the world's 10th largest airline and among the most profitable.

Qantas announced in August that it had more than doubled annual profit to AU$250 million, but warned the business environment was too challenging to forecast earnings for the current fiscal year.