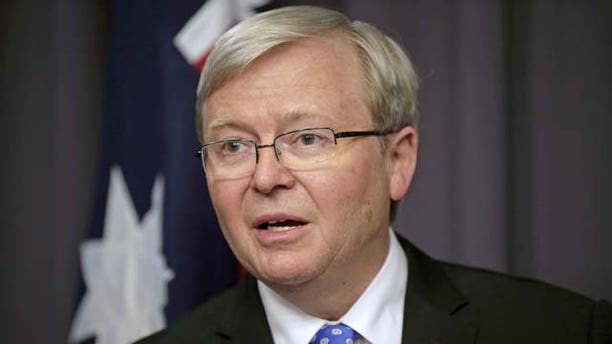 In this file photo, Kevin Rudd speaks to the media following a leadership ballot for the Labour Party at parliament in Canberra, Australia. (AP Photo)

Prime Minister Kevin Rudd has called an election on Sept. 7 and declared it will be fought over who can be trusted to manage the Australian economy after a mining boom fed by Chinese industrial demand has dwindled.

Rudd said Sunday that the date meant he would not attend the G20 meeting in Russia that week, but Australia would likely be represented by Foreign Minister Bob Carr.

Rudd flew to Canberra from his hometown of Brisbane on Sunday afternoon and later spent about 15 minutes in Governor-General Quentin Bryce's official residence.

Rudd was first elected prime minister in 2007 but was ousted in 2010 by his then deputy Julia Gillard in an internal leadership showdown within his center-left Labor Party.

He reclaimed the leadership in a similar challenge on June 26 as the government faced the prospect of a loss of historic portions with Gillard at the helm.

Since then, Rudd has changed several key policy positions, and opinion polls suggest Labor is closing the lead of the conservative opposition. But his government remains the underdog in elections that must be held before December.

A major issue is Australia's declining finances due to a shrinking mining sector cooled by diminishing demand from Chinese industry.

The Treasury Department on Friday raised its estimated deficit for the current fiscal year to 30.1 billion Australian dollars ($26.8 billion). The new forecast for the year ending June 30, 2014, reveals a substantial deterioration in Australia's finances since May, when the department forecast a deficit of AU$18 billion.

The government also announced a AU$33.3 billion shortfall in the revenue forecast over the next four years -- a deterioration of about AU$3 billion a week since the May forecast.

Tony Abbott, leader of the conservative Liberal Party-led opposition coalition, has vowed to give priority to scrapping Australian mining and carbon taxes if his party wins the election.

Both taxes were introduced by Labor in July 2012. The carbon tax on Australia's biggest polluters rose from AU$23 a metric ton of carbon dioxide to AU$24.15 from July 1, 2013. The opposition argues this is the world's highest tax rate on carbon dioxide and is making Australian industry uncompetitive.

The tax is due to be replaced in 2015 by an emissions trading scheme, in which the cost of emitting a metric ton of carbon would be determined by buyers and sellers in a carbon market.

Rudd has pledged to bring forward the emission trading scheme linked to the European market by a year to July 2014, reducing the cost to Australians of emitting a metric ton of carb dioxide from AU$25.40 to an estimated AU$6.

The 30 percent mining tax on the profits of iron ore and coal miners was designed to cash in on burgeoning profits from a mineral boom fueled by Chinese industrial demand. But the boom was cooling before the tax took effect, with prices for iron ore and coal peaking in 2011. The tax was initially forecast to earn the government AU$3 billion in its first year but collected only AU$126 million after six months.

The opposition has also promised to scale down the government's plan to build an AU$37.4 billion high-speed fiber-optic national broadband network.

The opposition proposes a slower, AU$20 billion version that would incorporate the aging copper wire network rather than replace it.