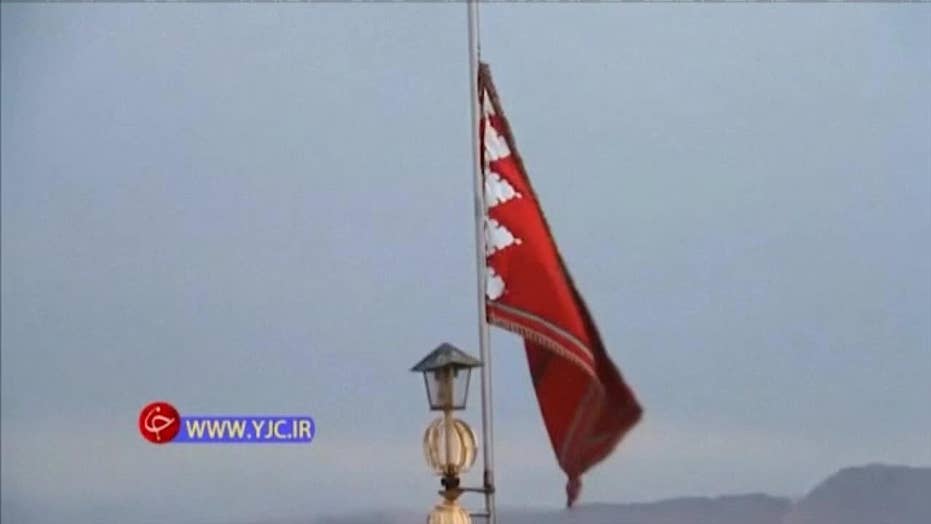 Red flags in Shiite tradition symbolize both blood spilled unjustly and serve as a call to avenge a person who is slain.

As the region braced for Iran to fulfill its vows of payback, mourners -- mostly men in black military fatigues -- raised red flags associated with unjust bloodshed and revenge at the funeral procession this weekend through Baghdad for Iran's top general and militant leaders who were killed in a U.S. airstrike on Thursday.

Helicopters hovered over the procession for Iranian Gen. Qassem Soleimani, the head of the Islamic Revolutionary Guard Corps' (IRGC's) elite Quds Force, which was attended by Prime Minister Adel Abdul-Mahdi, the commander in chief of the armed forces of Iraq, and leaders of Iran-backed militias.

The procession later made its way to the Shiite holy city of Karbala, where the mourners that are fiercely loyal to Soleimani raised the red flags -- a symbolic call to arms -- while expressing anti-American sentiments.

Red flags in Shiite tradition symbolize blood spilled unjustly and serve as a call to avenge a person who is slain, The Sun reported.

The red flags also have been flown at demonstrations in Tehran, according to the Daily Mail.

CNBC reported that the red flag was raised in Qom, the seventh-largest city in Iran.

It’s the first time in a Qom mosque's history -- a holy site since the Middle Ages -- that the red flag has been raised over the building, the Mail said.

Palestinian factions in the Gaza Strip, including the territory’s Hamas rulers, opened a mourning site for the slain general, and dozens gathered to burn American and Israeli flags. Iran has long provided aid to the armed wing of Hamas and to the smaller Islamic Jihad militant group.

The killing of Soleimani was “a loss for Palestine and the resistance,” senior Hamas official Ismail Radwan said.

“The Americans did not realize what a great mistake they made,” Rouhani said. “They will see the effects of this criminal act, not only today but for years to come.”

On the streets of Tehran, many mourned Soleimani.

“I don’t think there will be a war, but we must get his revenge,” Hojjat Sanieefar said.

Another man, who identified himself only as Amir, was worried.

“If there is a war, I am 100 percent sure it will not be to our betterment. The situation will certainly get worse,” he said.

Soleimani, who was widely seen as a national icon and a hero of the so-called Axis of Resistance against Western hegemony, was the long-running leader of the elite intelligence wing called the Quds Force, which itself has been a designated terror group since 2007 and is estimated to be 20,000 strong. Considered one of the most powerful men in Iran, he was routinely referred to as its "shadow commander" or "spymaster."

The Quds Force and other elements operate covertly or sometimes openly overseas, working with Hezbollah of Lebanon, Shiite militias in Iraq and Shiites in Afghanistan.

Soleimani was killed in an airstrike early Friday near the Iraqi capital's international airport. The drone strike, ordered by President Trump, has caused regional tensions to soar.

Multiple rockets aimed at an Iraqi air base just north of the U.S. embassy, where American troops are deployed, as well as the heavily militarized Green Zone were launched Saturday evening, according to multiple reports.

At least one rocket struck the Balad air base where an unspecified number of U.S. troops are housed, while another hit near the embassy compound in the Green Zone, U.S. Army Public Affairs spokesperson Maj. Charlie Dietz confirmed on Twitter.

Dietz said Balad was the only confirmed point of impact, although a second rocket seemed to strike just south of the Tigris River in the Green Zone.

A senior military official in Iran also threatened an attack on some 35 “American targets,” including “destroyers and warships” near the Persian Gulf Friday night, promising to seek revenge for the killing of Soleimani, according to a report.

Any further retaliation was likely to come after three days of mourning declared in both Iran and Iraq.

The procession for Soleimani began at the Imam Kadhim shrine in Baghdad, one of the most revered sites in Shiite Islam. Mourners marched in the streets alongside militia vehicles in a solemn procession.

Thousands of mourners chanted “America is the Great Satan” during the procession.

The mourners, many of them in tears, chanted: "No, No, America" and “Death to America, death to Israel.”