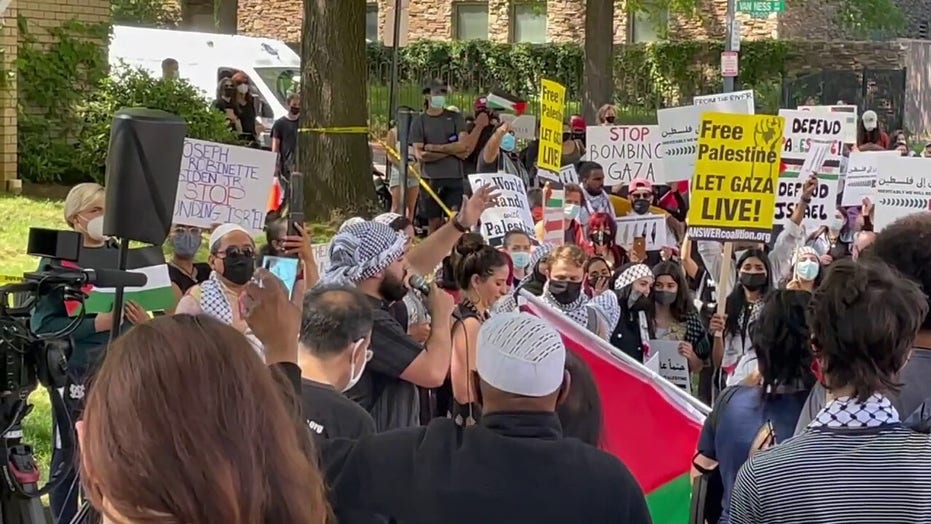 On Tuesday, hundreds of pro-Palestinian demonstrators took to the streets around the Israeli embassy in Washington, D.C., to protest Israel's response to a barrage of rocket attacks from the Palestinian terrorist organization Hamas.

Protesters at the rally, who came to Washington from all corners of the country, gathered to condemn what they view as unjustified and excessive military action from Israel.

Attendees could be heard shouting anti-Israel slogans throughout the day, including "from the river to the sea, Palestine will be free."

According to the American Jewish Committee, the slogan is a "common call-to-arms for pro-Palestinian activists. It calls for the establishment of a State of Palestine from the Jordan River to the Mediterranean Sea, erasing the State of Israel and its people. It is also a rallying cry for terrorist groups and their sympathizers, from the Popular Front for the Liberation of Palestine (PFLP) to Hamas, which called for Israel’s destruction in its original governing charter in 1988."

Another chant heard throughout the afternoon was far more direct in calling for the end of Israel. In unison, hundreds of attendees shouted, "Hey, hey, ho, ho, Israel has got to go."

The rally came on the same day the Black Lives Matter movement pledged solidarity with Palestinians.

Some of the attendees openly questioned Israel’s right to exist.

One protester named Sam, who traveled to the event from New York and asked to be identified by his first name only, said he was at the rally to "finally put an end to the [Israeli] occupation" and that "Israel as it exists, as a settler colony, does not have the right to exist."

Another protester, who commuted from Maryland, said she was there to oppose U.S. policies toward Israel. "Our tax dollars are going to fund Israel murdering children and we need to stand up and stop that," she said.

The same protester argued that her race made it difficult to say whether Israel has the right to exist. "I personally do not have a specific opinion on [Israel’s right to exist]. I think that that is the thing of Palestinian people whose land has been occupied to decide, and not me. My place as a person, as a White person and as a person of the United States, is to support them in what they’re doing, and they’re doing amazing."

According to reports, Israel has been on the receiving end of more than 3,400 rockets since the conflict began over a week ago.

One protester, who was asked if the Palestinians bear any responsibility for the recent conflict, simply responded, "no."