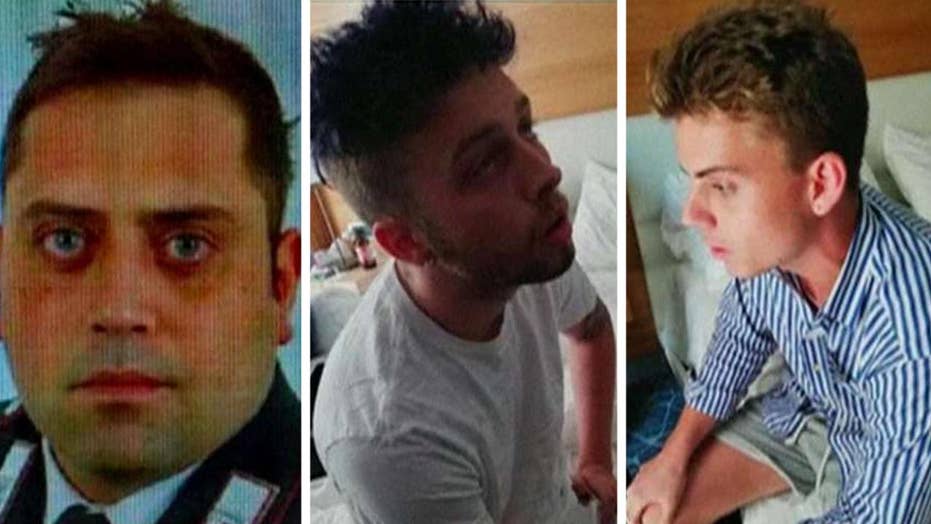 One of the American teenagers jailed in Italy for allegedly killing a local police officer in a drug deal gone bad won’t be getting released anytime soon after his lawyer dropped a request for his client to be released.

Renato Borzone, the lawyer for Finnegan Lee Elder, said he is still working to clarify “key passages” to get the full picture in the investigation against the 19-year-old.

Elder, and his friend, Gabriel Natale-Hjorth, 18, both of San Francisco were arrested in the Italian capital in July after the fatal stabbing of police officer Mario Cerciello Rega.

Authorities said Elder, who has confessed to knifing the officer during a scuffle, used a 7-inch Ka-Bar developed for U.S. troops during World War II. Cerciello Rega was investigating a drug deal involving the two teens when he was stabbed 11 times.

Prosecutors said the teens had organized a rendezvous to obtain money and cocaine in exchange for a backpack they had snatched from an Italian man. The man, suspected of being an intermediary in the drug deal, had called police asking them to intervene.

Both teens told investigators that they didn't know that the two officers were Carabinieri as they were in plainclothes and didn't identify themselves. But their version contradicts that of Cerciello Rega's partner, who said they both showed their badges when they confronted the teens.

Elder's U.S. attorneys said in a separate statement Friday that "the boys' version of what happened that night has gained support from the objective incident and has become the only version that makes sense."

A hearing on Natale-Hjorth’s petition for release will be held on Sept. 16.

After the teen’s arrest, his father, Fabrizio Natale, told Fox News that his son was “distraught” over what happened.

“We are deeply upset by his predicament while at the same time convinced of his innocence,” he said in a statement.

Meanwhile, in a statement issued Friday, Elder’s mother, Leah, said "she has been grateful to have been able to see her son" in Rome in the past two days and sent her thoughts to Cerciello Rega's family.

"Finn is trying to stay hopeful but has suffered from severe depression since the incident," the family said. "While in prison he has seen the way the media has portrayed him and the circumstances of the case and it has been difficult to hear the facts unfairly misrepresented."

Fox New's Travis Fedschun and the Associated Press contributed to this report.