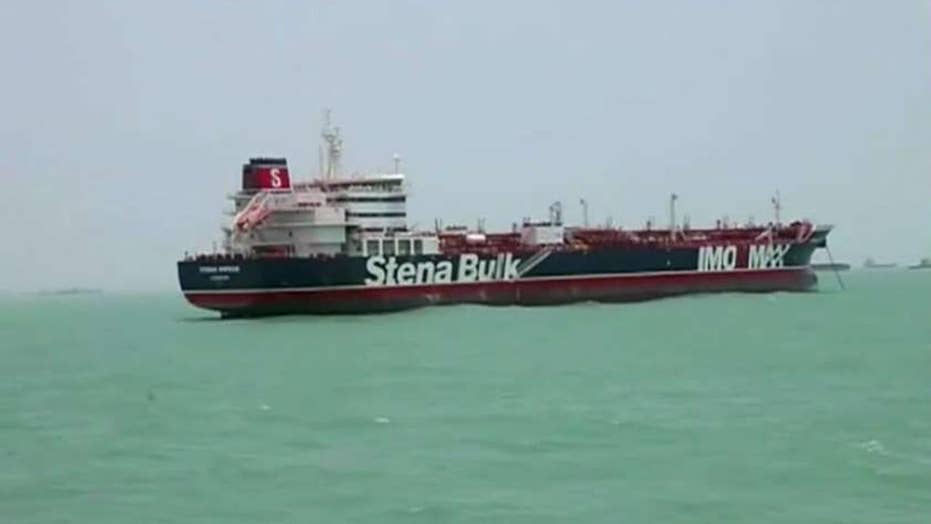 Eric Shawn: Iran is at it again

MIT’S Jim Walsh on the oil tanker tit for tat.

In the recording, released by maritime security firm Dryad Global, an Iranian vessel tells HMS Montrose it wants to inspect the Stena Imperio for security reasons, according to the BBC.

"You obey, you will be safe," and Iranian officer is heard telling the tanker.

"Alter your course to 360 degrees immediately, over," the officer says, adding that the ship is wanted for security reasons.

A British naval officer on the Montrose is then heard telling the Stena that its passage must be allowed.

POMPEO SAYS ‘NO INDICATIONS’ THAT IRAN IS CHANGING ITS ‘MALIGN BEHAVIOR’

"Sir, I reiterate that as you are conducting transit passage in a recognized international strait, under international law your passage must not be impaired, intruded, obstructed or hampered," the British officer says.

The British officer then tells an Iranian patrol boat: "Please confirm that you are not intending to violate international law by unlawfully attempting to board the MV Stena."

Iranian officials say the seizure of the British oil tanker in the Strait of Hormuz was a response to Britain's role in impounding an Iranian supertanker two weeks earlier.

Britain has called the seizure, which comes at a time of heightened tensions between the U.S. and Iran, a “hostile act.”

President Trump said Friday that although Iran was “nothing but trouble,” he was hopeful the standoff over the seizure could be resolved.

The BBC quoted Chancellor Philip Hammond as saying Sunday the government would pursue "every possible diplomatic route" in response.

At the same time, Iran's ambassador was quoted as warning that the U.K. should not escalate tensions.

“This is quite dangerous and unwise at a sensitive time in the region,´ Hamid Baeidinejad said. "Iran, however, is firm and ready for different scenarios."

The crew of the Swedish-owned ship is made up of Indian, Latvian, Filipino and Russian members, according to the news outlet.