After nightclub fire that killed 238, worries raise about safety during Brazil's Carnival 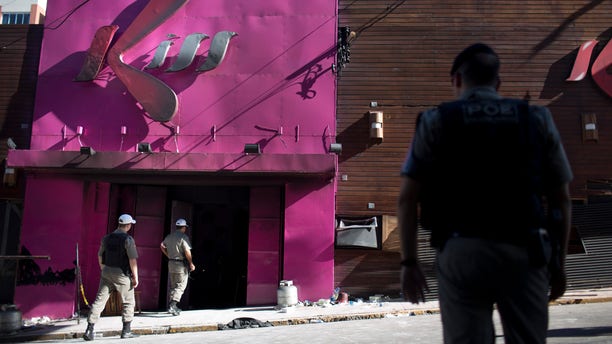 FILE - In this Jan. 28, 2013, file photo, police officers enter the Kiss nightclub after a fatal fire in Santa Maria city, Rio Grande do Sul state, Brazil. Just over a week since the nightclub fire killed nearly 240 revelers in southern Brazil, Carnival festivities hit full stride Friday, Feb. 8, raising questions about the safety of those who will pack party spaces across the nation. (AP Photo/Felipe Dana, file) (The Associated Press)

Just over a week since a nightclub fire killed nearly 240 revelers in southern Brazil, Carnival festivities hit full stride Friday, raising questions about the safety of those who will pack party spaces across the nation.

In the days following the deadly blaze at the Kiss club in the university town of Santa Maria, authorities across Brazil increased fire inspections and closed dozens of clubs in many major cities, mostly citing problems with the establishments' paperwork.

But most of the clubs have already reopened — leading fire experts to say few changes were put in place to really improve safety for patrons.

"Certainly for Carnival, we'll still have many security problems in the clubs, because there is no possibility of having intense inspections in every corner of Brazil, and there was no time to have made necessary adaptations," said Telmo Brentano, an engineering professor in Porto Alegre, capital of the state where the Jan. 27 Kiss club fire took place.

Brentano, an activist for the creation of federal laws on fire safety and author of two books about fire safety engineering, said something positive may come from the blaze that killed 238 people before Brazil hosts the world's two biggest sporting events in the next three years.

"Things will certainly be better than they are today by the World Cup and the Olympics," he said. "The shock of the Santa Maria tragedy was so intense that now patrons of public establishments are more aware of dangers they may face if minimum fire safety standards aren't met. There really was a great awakening on the issue."

City and state officials in Sao Paulo, Brazil's biggest city, and Rio de Janeiro, the center of Carnival where about 500,000 tourists are expected to visit through Wednesday, declined to comment on the specifics of increased fire safety inspections in the past week. Fire officials in Rio de Janeiro said only that their goal is to carry out 40,000 inspections in 2013.

But Brentano and other fire experts said more inspections will mean little because of Brazil's lack of consistent fire laws. Each state enacts its own laws and cities can create their own as well — and corruption at the state and local levels undermine the rules that do exist, the experts said.

Police say the Santa Maria fire started when a band performing at the club lit a small flare, which ignited flammable soundproofing foam on the ceiling. There was a near-total lack of emergency infrastructure in the club, such as a fire alarms, emergency lights or sprinkler systems. The club had just one working door, and its single fire extinguisher was faulty.

D'Amico is not optimistic on the chances of Brazilian nightspots making great strides in fire protection before the 2014 World Cup and 2016 Olympics, let alone this year's Carnival.

"I am not talking about the new stadiums and buildings being built or renovated, but of the hundreds of thousands of places — restaurants, nightclubs, theaters — that people coming for the two events are going to fill to capacity and that will probably not have proper fire prevention measures in place," he said.

"I've been in high-rises in Brazil with no sprinklers or fire alarms," he said. "I looked for emergency exits and was scared out of my mind when I thought about what could happen if there was a fire."

He accused Brazilian construction companies and building owners of being less concerned with safety codes than with esthetics and budgets.

But D'Amico puts the main blame on politicians, who he said "turn a blind eye to the fact that legislation must be updated and inspectors must go into buildings to make sure fire prevention measures are in place."

The government must adopt a "hard-line fire prevention approach and determine what has to be done and set specific deadlines to make the needed changes," he said.

"The installation of proper fire prevention mechanisms — sprinklers, alarms, exit doors — costs a lot of money and building owners are not motivated by spending money. They are motivated by making money."