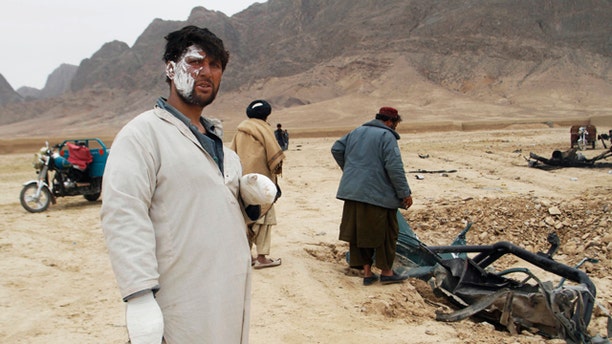 Feb. 27, 2011: A wounded Afghan man looks on as others examine the wreckage of a car after an explosion in the Arghandab district of Kandahar province, Afghanistan. (AP)

Sixty-five civilians, including 40 children, were killed in a NATO assault on insurgents in eastern Afghanistan earlier this month, according to findings of an Afghan government investigation released Sunday.

Tribal leaders had alleged that dozens of civilians were killed in the operation in Kunar province, which involved rocket and air strikes, but NATO has not confirmed any civilian deaths.

The incident inflamed tensions between the Afghan government and NATO forces, and both sides opened investigations.

But allegations of civilian deaths from NATO forces — who pledge to protect the population — often cause much more anger.

NATO has said that video of Kunar operations on Feb. 17 — the main event of more than three days of fighting — showed troops targeting and killing dozens of insurgents, not civilians.

However, the Afghan team investigating the incident found that 65 civilians had been killed, including 40 children age 13 and under, said Shahzada Masoud, one of the investigators. The group presented its findings Sunday to President Hamid Karzai.

Investigators said they compiled a list of names and ages of the victims, and planned to release them but were not prepared to do so Sunday.

Karzai's office said he was concerned by the findings.

They did not visit the scene of the attack but had people from the villages come to the provincial capital to be interviewed. The main area — called Helgal — is considered very dangerous and is rarely visited by government officials.

Masoud said the dead had already been buried, but that he had reports of 75 graves.

The team did not look into the number of militants killed or consider the NATO footage since it was only asked to identify civilian deaths, Masoud said.

The team shared its findings with NATO investigators in Kunar, but could not reconcile the differences. "They (NATO officials) told us that there might be civilian casualties as a result of this operation but not the high number we have found," he said.

A NATO spokesman, Rear Adm. Vic Beck, said Sunday that according to preliminary findings, seven to nine civilians may have been injued. "For any civilian casualty that occurred as a result of operations, we are deeply sorry and will work to make amends to the families involved," he said.

A recent U.N. report documented 2,412 conflict-related civilian deaths in the first 10 months of 2010. More than three-quarters of them were caused by militant activity, a 25 percent increase from the same period in 2009, the report said. At the same time, civilian casualties attributed to pro-government forces, including those from the NATO coalition, decreased.

A spate of insurgent attacks in recent weeks have killed scores of civilians, weakening the Taliban's assertion that they try to avoid civilian casualties in their attacks on government and NATO forces.

In Sunday's deadliest attack, twin blasts in southern Afghanistan killed eight people who had gathered for an illegal dog fight.

The explosion in Kandahar province's Arghandab district also wounded five police who had gone to break up the group, said district Police Chief Niaz Mohammad. Though dog fights are against the law in Afghanistan, they are still common and often ignored by the authorities.

It was unclear who the target of the attack was, though a witness said it was unlikely that it was the police. "The Taliban also don't allow dog fighting," said Ismail Alokozai, a bystander who helped some of the wounded.

Also in the south, a NATO service member was killed by a bomb blast, the international military coalition said. Another was killed in an insurgent attack in the east. The force did not provide the nationality of the victims or other details. Thirty troops serving with international forces have been killed so far this month.

Officials in Kandahar city said that a NATO vehicle there hit a roadside bomb and that either dead or wounded were carried away in a helicopter, though it was not clear if this was the same incident. The Taliban claimed responsibility for the Kandahar city blast.

In the western city of Herat, a roadside bomb that appeared to be targeting a passing police vehicle killed a 10-year-old boy, said provincial spokesman Shafiq Ahmad Behrood. No police officers were killed, he said.

In a separate development, the Canadian government said a Canadian tourist visiting Afghanistan is missing.

Emmanuelle Lamoureux, a spokesman for the Ministry of Foreign Affairs and International Trade in Ottawa, said Sunday that Canadian officials are working with Afghan authorities to secure the release of the citizen.

The Taliban said in an e-mailed statement that they are holding a Canadian whom they detained in the city of Ghazni, southwest of the capital.