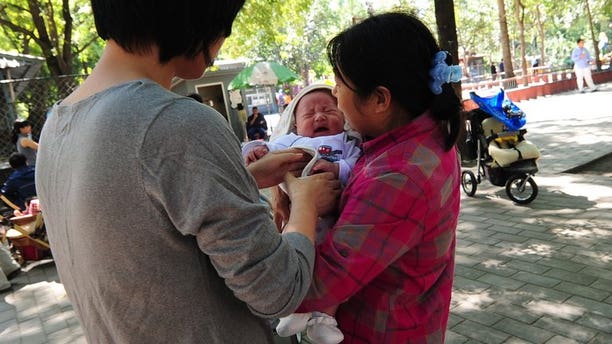 A mother and nanny tend to a baby at a park in Beijing on September 23, 2010. Human breast milk has become a new luxury for China's rich, with some firms offering wet nurse services, a report said, provoking outrage and disgust among web users Thursday. (AFP/File)

Xinxinyu, a domestic staff agency in the booming city of Shenzhen, which borders Hong Kong, provided wet nurses for newborns, the sick and other adults who pay high prices for the milk's fine nutrition, the Southern Metropolis Daily said.

"Adult (clients) can drink it directly through breastfeeding, or they can always drink it from a breast pump if they feel embarrassed," the report quoted company owner Lin Jun as saying.

Wet nurses serving adults are paid around 16,000 yuan ($2,600) a month -- more than four times the Chinese average -- and those who were "healthy and good looking" could earn even more, the report said.

Traditional beliefs in some parts of China hold that human breast milk has the best and most easily digestible nutrition for people who are ill.

But the report sparked heated debate in the media and on Chinese social media, with most users condemning the service as unethical.

"This adds to China's problem of treating women as consumer goods and the moral degradation of China's rich," said Cao Baoyin, a writer and regular commentator in various Chinese media, on his blog.

Xinxinyu has been ordered to suspend its operations and had its business licence revoked for multiple reasons including missing three years of annual checks, regulators in Shenzhen told AFP on Thursday, although the wet nurse service was not among the factors they cited.

Company officials could not be reached for comment by AFP.

There were nearly 140,000 postings on Sina Weibo, a Chinese equivalent of Twitter, on the topic by Thursday afternoon.

In an online poll, almost 90 percent of participants voted against the service, saying it "violated ethical values", a fraction over 10 percent deemed it a "normal business practice".

"People become perverts when they are too rich and tired of other forms of entertainment. This is disguised pornography," said a user with the online handle ricky_gao.

White Lotus, another weibo writer, said: "Please do not force motherhood to lose its grace and become ridiculous."

"It's just a business, nothing to blame it for," said A Xiao Shuai. "People are insensitive about ethics when there is money on the table."

Among the general population in China breastfeeding rates are low -- just 28 percent according to a 2012 UNICEF report -- due to time limits on maternity leave and aggressive marketing of formula.