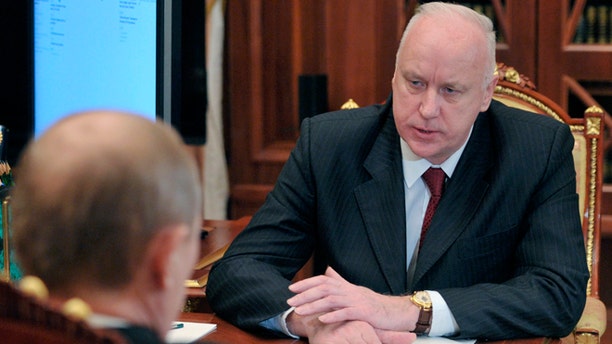 Russia's top cop has a new star role at the heart of the Putin regime. His mission? Shut down the opposition.

Alexander Bastrykin's Investigative Committee has become President Vladimir Putin's de facto political police, accountable to him alone. The fearsome organization was given the new mandate after Putin returned for a third term as president last year, embittered and shaken by huge protests against his rule.

As new raids, arrests and charges hit the opposition seemingly every week, Bastrykin's inquisitorial zeal and the degree to which charges often strain credulity show how the Kremlin is ratcheting up its longstanding practice of using the law as a tool to crush political enemies.

"Bastrykin is a man who follows any order — he'll shut anyone down on any charge — and that's what makes him so valuable to Putin," Alexei Navalny, a leading anti-corruption activist embroiled in four separate legal battles with the Investigative Committee, told The Associated Press in an interview.

Russia's opposition, weakened and fractured after the protests petered out, is now forced to spend much of its time fighting often outlandish allegations from the Investigative Committee. Navalny is to go on trial in April on charges of leading an organized crime group that stole more than 10,000 cubic meters of timber worth 16 million rubles (about $500,000) while he worked for a provincial governor.

Several activists face charges based on a documentary-style TV show that said they were pawns of a minor Georgian lawmaker, Givi Targamadze, whom the show depicted as a murky figure working in league with rogue oligarchs to seize the Kremlin. When one of the defendants, Leonid Razvozzhayev, said he had been kidnapped in Ukraine and tortured into signing a confession, investigators deported him to Siberia on charges of stealing 500 fur hats in 1997, even though he had been cleared of the charges long ago.

"Those charges are obviously crazy and have no legal basis, but to some degree, that's part of the point," Gleb Pavlovsky, a former Kremlin political consultant, said. "It shows that all legal measures have been thrown out the window, and that scares people."

With Putin's backing, Bastrykin appears to have a free hand. Ostensibly, his agency is a Russian counterpart to the FBI, handling special crimes like murders, corruption cases and organized crime. In practice, however, the Investigative Committee recalls the FBI under its volatile founder J. Edgar Hoover, who abused the bureau's considerable power to harass dissenters and settle political scores.

Last June, the ruddy-faced Bastrykin drove Sergei Sokolov, a journalist at the fiercely anti-Putin newspaper Novaya Gazeta, into a wood near Moscow and threatened to behead him and dismember his body so that it could not be found. Sokolov fled the country in terror, returning only after Bastrykin apologized for what he called an "emotional outburst." Courts have rejected Navalny's appeals for an investigation into the incident.

Navalny's battle with Bastrykin has long crossed over into open enmity. A few weeks after Navalny appealed to have Bastrykin investigated last summer, Bastrykin publicly harangued investigators for closing a case against him, thundering from a podium: "There will be no forgiveness! There will be no mercy!"

The investigation was subsequently reopened. Navalny then published documents alleging Bastrykin had not paid taxes and used false documents when selling a Czech real estate firm.

Since then, Navalny has faced a torrent of accusations in the four criminal investigations, repeated again and again on Kremlin-friendly TV. One alleges he embezzled 100 million rubles (about $3.25 million) from a now-defunct opposition party in 2007, even though no members of the party reported any money stolen.

The legal onslaught has severely hampered the corruption-fighting organization Navalny runs by scaring away major donors and monopolizing his time. The threat of jail time, meanwhile, has been a factor in the waning protests, which once gathered upward of 100,000 people.

"They don't even need to put these people in jail," said Yuri Skuratov, Russia's prosecutor general from 1995 to 1999. "They just need the charges to hang over them like the Sword of Damocles so that they behave properly — and if you start acting too radically, the investigators will come and get you."

In power since 2000, Putin faced major public discontent for the first time after his party won a parliamentary election in December 2011, helped by what independent observers considered widespread fraud. Protesters took to the streets, denouncing Putin and his loyal election commissioner Vladimir Churov, whom they dubbed "The Wizard." After Putin won his third term in March 2012, the Kremlin's attitude toward the protesters hardened.

Bastrykin declined a request for an interview.

He was a little-known legal scholar in St. Petersburg when Putin, his university classmate, became Russia's president in 2000. Like so many residents of Putin's hometown with a connection to the new president, Bastrykin then moved into government, taking up a minor post in a regional branch of the Justice Ministry.

"Bastrykin's really a classic example of the Putin majority that we built 10 years ago, founded upon people with no hope," Pavlovsky said. "He didn't see a way forward for himself. Those were the people who understood that Putin's arrival was their last chance."

The Investigative Committee was founded in 2007 after high-level corruption scandals stoked long-held Kremlin fears that the prosecutor general's office had too much unchecked influence. Bastrykin's committee took over the office's investigative functions and became a full-fledged agency in 2011, answering directly to the president.

Russia's justice system gives Bastrykin the upper hand in court. Russian criminal cases are decided by judges on the basis of the investigator's case file, which is presumed to be correct, and the defense and judiciary are to a great extent excluded from the process.

As a result, more than 99 percent of trials result in convictions, according to Vadim Volkov and Kirill Titaev of the European University at St. Petersburg. Since a defendant's guilt is essentially assumed when he is charged, nearly 93 percent plead guilty immediately.

Bastrykin has made no secret of his desire for greater power still. To the ire of much of the Russian political and security establishment, Bastrykin is openly campaigning for the government to transfer all other security agencies' investigative functions to him.

"He's clearly not particularly adept at doing his job — at no point did he cover himself with glory," Mark Galeotti, a professor at New York University who studies Russian security agencies, said. "Now he's thrown himself into empire-building and made enemies he can't afford to make."

For now, the Investigative Committee seems to relish its status as bete noir among Russia's security agencies. Emboldened by Putin's faith in him, Bastrykin has turned it into his own personal fiefdom, with its own theme song, TV show, militaristic titles like "major-general of justice" and uniforms Bastrykin himself patterned after Stalin-era dress.

At a ceremony celebrating its two-year anniversary in February, Bastrykin harked back to a similar agency Peter the Great founded three centuries earlier to be "the eyes of the czar."

He further spelled out his crime-fighting vision in an interview to the Kommersant newspaper: "The only way to beat the mafia is to create your own mafia," Bastrykin is quoted as saying.

Navalny, for his part, is under no illusions about what he describes as his impending conviction.

"I'm philosophical about it," Navalny said. "They're not just going to wait around while we rub them out."

Max Seddon can be contacted at twitter.com/maxseddon