400-year-old Hong Kong tree to be chopped down 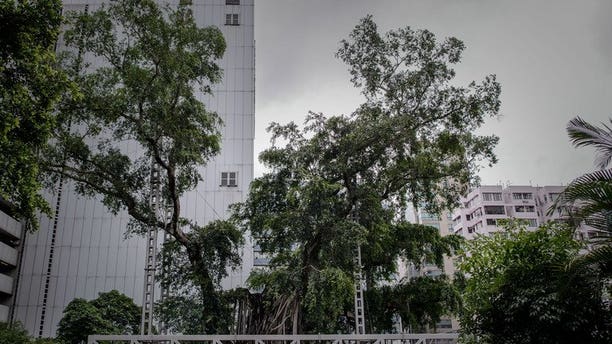 A 400-year-old banyan tree is seen in Kowloon Park in Hong Kong on August 23, 2013. The tree will be cut down, authorities said Friday, after being hit by a fungal disease brought on when a park development starved its roots of oxygen and nutrients. (AFP)

A 400-year-old banyan tree in Hong Kong will be cut down, authorities said Friday, after being hit by a fungal disease brought on when a park development starved its roots of oxygen and nutrients.

Nestled in the heart of the city in Kowloon Park, the tree, Hong Kong's oldest Chinese banyan, has been infected with the deadly brown root rot disease that authorities fear could spread to others nearby.

A third of the tree collapsed in a 2007 typhoon, but the enormity of it still amazes passersby as they walk near its towering trunk, 22 metres high (72 feet) with a crown spread of 27 metres.

"No other banyan tree was as old as this one, none was as big as this one," chair of Hong Kong University geography department Jim Chi-yung told AFP, explaining that it had existed during the time of the Qing Dynasty.

But authorities were left with no choice but to fell the giant tree, fondly known as 'King Banyan', because of the risk it posed to others in the vicinity, he added.

"It has become a locus of disease spread we don't want it to affect other trees in the vicinity or in the district," Jim, who also served on a government expert panel that made the decision said.

The tree was diagnosed with the infection in 2009 and other trees in the area were also found infected with earlier this year, a government spokeswoman said.

"It is considered that the tree has little chance of recovery," she said, adding that it will be removed in September.

The disease was brought on by "improper park design" where the tree's roots were buried with additional soil and concrete to make the portion of the park level in 1989, blocking it from air supply, water and nutrients, Jim said.

"Burying trees with compacted soil and concrete will not give you a strong tree," he said.

"The whole saga is avoidable and unnecessary," Jim added. "It is a very sad picture."