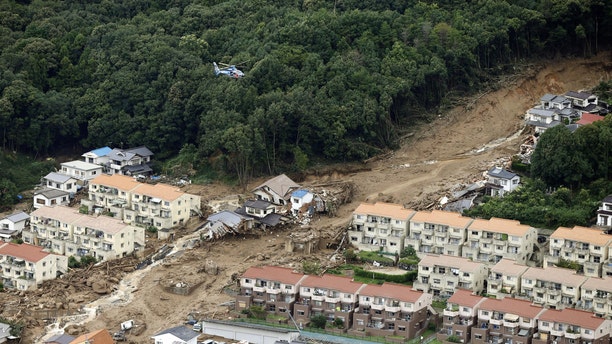 Aug. 20, 2014: In this aerial photo, a rescue helicopter hovers over an area devastated by a massive landslide in Hiroshima, western Japan. (AP)

Public broadcaster NHK showed rescue workers suspended by ropes from police helicopters pulling victims from the rubble. Others gingerly climbed into windows as they searched for survivors in crushed homes.

Hillsides were swept down into residential areas in at least five valleys in the suburbs of the western Japanese city after heavy rains left slopes unstable.

Hiroshima prefectural police said 36 people were confirmed dead and at least seven others were missing as of Wednesday night. The Fire and Disaster Management Agency said 15 people were injured, two seriously.

Local government official Nakatoshi Okamoto said a few people were washed away it was hard to know exactly how many were unaccounted for, because harsh conditions in the disaster area were hindering rescuers.

The land collapsed so quickly at multiple locations that evacuation advisories came an hour after the first mudslide, said Kenzo Kanayama, the city's disaster management chief. "We misjudged the situation. It was too late," he said.

Prime Minister Shinzo Abe, who was on vacation, had to cancel his plans to play golf outside Tokyo and rush back to his office to set up a taskforce.

Landslides are a constant risk in mountainous, crowded Japan, where many homes are built on or near steep slopes. Torrential rains early Wednesday apparently caused slopes to collapse in an area where many of the buildings were newly constructed.

The damage was extensive "because of intense rain, extremely fragile slopes and the disaster hitting in the dead of night," he said in an interview on NHK. Mudslides, floodwater, broken trees and debris flowed down the hill, smashing into houses, he said.

More than 30 people died in 1999 when Hiroshima was hit by hundreds of landslides.

Damage from land and mudslides has increased nationwide over the past few decades due to more frequent heavy rains, despite extensive work to stabilize slopes. In the past decade there have been nearly 1,200 landslides a year, according to the land ministry, up from an average of about 770 a year in the previous decade.

In October last year, multiple mudslides on Izu-Oshima, an island south of Tokyo, killed 35 people, four of whose bodies were never recovered. Those slides followed a typhoon that dumped more than 32 inches of rain in a single day.