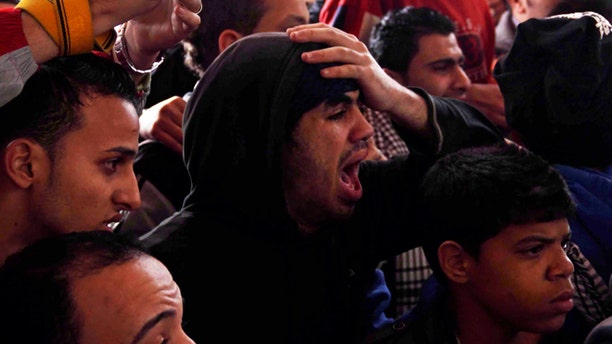 Jan. 26: Families and supporters of those accused of soccer violence from the Port Said soccer club react to the announcement of verdicts for 21 fans on trial in last years Port Said stadium incident which left 74 people dead, in Port Said, Egypt. (AP)

The director of hospitals in Egypt's Mediterranean city of Port Said says two soccer players are among the 27 people killed in riots there.

Violence erupted in Port Said after a judge sentenced 21 people to death in connection with a Feb. 1 soccer melee that killed 74 fans of the Cairo-based Al-Ahly team.

He says Tamer al-Fahla, a soccer player who used to play for the city's main Al-Masry team, was also shot dead on his way to Al-Marikh club.

The club is near a prison residents tried to storm Saturday to free defendants in the soccer trial. The military has been deployed to try and restore security.