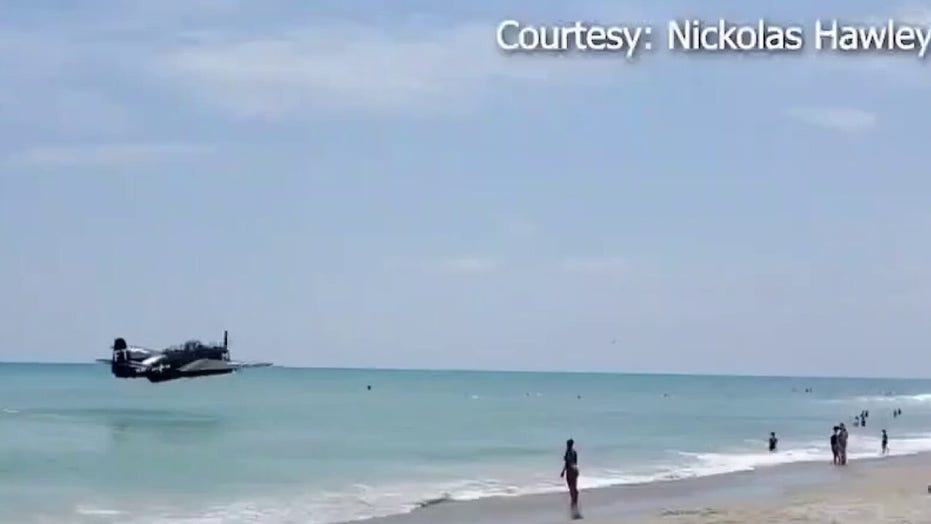 A WWII-era plane flying in a Florida airshow made an emergency landing in the ocean near Cocoa Beach.

A restored World War II-era plane flying in a Florida air show made an emergency water landing in the ocean Saturday as concerned onlookers watched from a beach.

Witnesses captured video of the single-engine TBM Avenger descending slowly over the heads of beachgoers near the Cocoa Beach Air Show and landing in the shallow water just offshore.

"It looked like (the pilot) pulled up at the last moment and avoided any spectators," witness Melanie Schrader told Florida Today. "There were loads of people on the water, and then I saw him on top of the plane. It looked like he was OK."

Officials with the Cocoa Beach Air Show released a statement saying the plane had a mechanical issue and that rescue personnel were standing by during the landing. They said no one was injured during the incident.

The U.S. Navy deployed the TBM Avenger as a torpedo bomber during World War II.

After the single-engine aircraft was retired from Navy use, the plane saw action as a fire bomber for the U.S. Forestry Service, according to the Cocoa Beach Air Show website.

The plane underwent an "extensive restoration" for 18 years before returning to the skies in January 2020, the website said.