Worst Florida damage from Irma in could be from storm surge 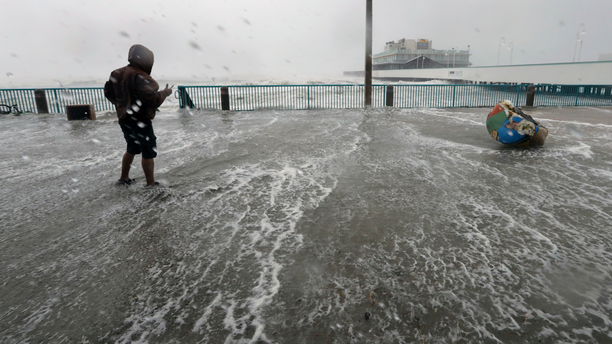 The biggest danger to life and property from Hurricane Irma could come from storm surge that forces seawater inland, which could topple houses, isolate residents who don't evacuate and make drowning an imminent threat, the National Hurricane Center is warning.

Storm surge occurs when heavy winds push the ocean onto the land, and it's a destructive feature of many cyclones and hurricanes, including Hurricane Harvey in Texas last month. Irma's surge could top 12 feet in areas of the Florida coast, and some surge is predicted up and down the state's Atlantic and Gulf coasts.

The most severe storm surge is projected for a more than 200-mile stretch of southern Florida coast from Miami to north of Fort Myers, while the Florida Keys also are expected to see significant surge.

The rising seas could cause fatalities among people who do not evacuate, hurricane center storm surge specialist Jamie Rhome said.

"We evacuate for storm surge, not wind," Rhome said. "People don't understand the water. You're not going to get out and swim away. It's got waves on it, it's got debris in it. Get out quickly."

The hurricane center is forecasting that storm surge could be the most dramatic in the Miami area and in Collier, Monroe and Lee counties, all of which could see surge higher than nine feet above ground. Storm surge could be noticeable 10 or more miles inland in some areas, with the depth of the water becoming shallower away from the coast, the center has said.

There are dozens of locations along the Florida coast where the sea level has risen in recent decades because of climate change, and the National Oceanic and Atmospheric Administration has said the pace is accelerating.

The surge from Irma could be a few inches higher in some areas that already have experienced sea level rise, Rhome said.

He added that sea level rise remains a long-term threat to Floridians while the threat of catastrophic surge created by Irma is "a short term crisis in front of them."

Federal Emergency Management Agency chief Brock Long said Friday that Irma will have a "devastating" impact on the state. The surge is likely to start before the storm makes landfall.

Conditions in some parts of coastal Florida make it ideal for heavy storm surge, said Stephen Leatherman, a professor in Florida International University's department of earth and environment.

Storm surge can be severe where offshore water is shallow and the geography of the land creates a "funnel effect" that forces the surging water to become higher, Leatherman said. Those conditions exist in places such as Biscayne Bay, which is near Miami and is especially susceptible to storm surge, he said.

Similar conditions proved disastrous in New York and New Jersey during Superstorm Sandy in 2012. Some areas around northern New Jersey and New York City were inundated by more than seven feet of water from the storm, according to the National Weather Service. This summer, Hurricane Harvey brought storm surge higher than 10 feet to some areas of the middle Texas coast, the weather service said.

Harvey wasn't a major storm surge event for Houston since much of the damage was from wind, rain and flooding, said Philip Bedient, professor of engineering in civil and environmental engineering at Rice University. The surge from Irma could be potentially much worse, "a monster event," for Miami, he said.

Irma could be bigger and more destructive than prior major storms, with its surge reaching inland and disrupting house wiring and causing fires, Leatherman said.

The hurricane also has the potential to do considerable environmental damage to the fragile Everglades, parts of which are still recovering from Hurricane Andrew in 1992, he said.

Beach erosion is expected along the Florida coast, but Rhome of the hurricane center said there is a graver threat to coastal inhabitants.

"You're talking about communities and areas inundated by salt water," he said. "Beach erosion is the least of their concerns right now."

HURRICANE NEWSLETTER - Get the best of the AP's all-formats reporting on Irma and Harvey in your inbox: http://apne.ws/ahYQGtb