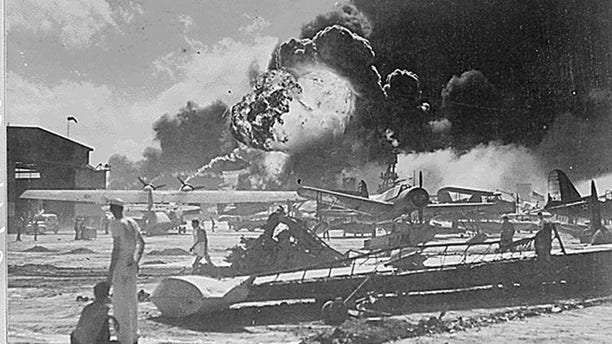 December 7, 1941: Members of the U.S. Military stand near airplane wreckage during the surprise Japanese aerial attack at Naval Air Station at Pearl Harbor in Hawaii. (Reuters)

A 90-year-old World War II veteran en route to a ceremony marking the 72nd anniversary of the attack at Pearl Harbor was booted from his flight to accommodate the weight of additional jet fuel needed for the trip.

According to Hawaii News Now, Ewalt “Walt” Shatz, a WWII veteran credited with shooting down a Japanese plane during the 1941 attack, was scheduled to take a United Airlines flight direct from Los Angeles to Honolulu on Wednesday, but was re-booked on an American Airlines flight leaving eight hours later that included a layover in Maui.

“I was surprised.  I didn't know which way to go.  Here I am at LAX with all these people and it's all new to me. I was just lost I didn't know what to do which is an awful feeling," Shatz told the paper.

Shatz was traveling alone and suffers from macular degeneration, an eye condition that limits his sight. "They just left me kind of stranded. Here I'm 90 years old, and I don't know -- I really didn't have anybody else I could call."

Shatz said he was told by a United Airlines agent at LAX only two passengers on the Boeing 737 to Honolulu had been booted.

Shatz reportedly told two United desk agents -- and a supervisor -- he was a WWII vet invited to attend a remembrance ceremony at the USS Arizona memorial to mark the attack’s anniversary.

United, in a statement to Hawaii News Now, said, “Inclement weather in the path of United flight 1226 required the flight to carry additional fuel and, as a result, reduce the number of passengers on board by 41.

“United agents in Los Angeles re-booked those customers, including Mr. Shatz, on the best available alternate flights on United and other airlines. We look forward to speaking with Mr. Shatz and the other affected customers.”

Shatz arrived in Honolulu just before midnight and in time for the ceremony.

Word of his Shatz’s plight traveled quickly on the Internet, and 71 people – mostly U.S. service members – organized a last-second welcoming party for him at the airport in Honolulu.

"Getting ready to put my khakis on and go greet a WWII vet (Pearl Harbor Survivor)... If you are on island and would like to come greet and honor this hero, come on out," Navy Chief Benjiman Scott wrote in part on his Facebook page, according to the paper.

"Everybody wanted a picture with me and they were making out like I was hero, but I'm not really.  It was embarrassing in a way, but I liked it.  It was nice," Shatz told WOAI News 4.

Reportedly added Chief Navy Counselor Rex Parmelee: “This is why we're serving.  We're here to tell their story.  We're here to show our respect for them.  It's a tremendous honor and that's why we take it so serious. Heritage is huge."

Shatz was 18 years old in 1941 when Japanese warplanes attacked Pearl Harbor. The Navy has reportedly credited him with shooting down a Japanese plane during the battle with an anti-aircraft gun.

"I don't know if I did or not; somebody said I did,” Shatz reportedly said. “I fired a 50 caliber machine gun and it's possible I did shoot at some planes, but whether I hit any or not -- that's another story.  I don't take any credit for any of that. Whether I did or not, probably only God knows.”