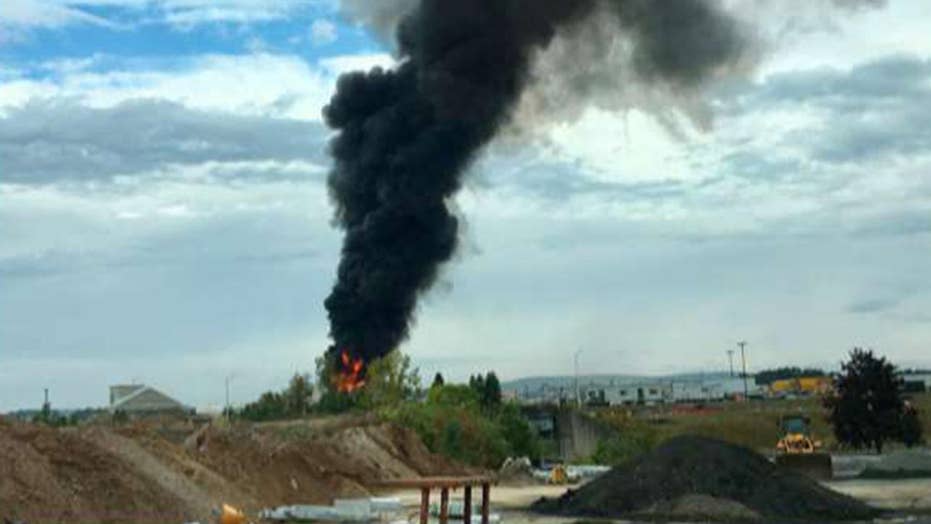 Seven people are dead and six others injured after a World War II-era bomber crashed Wednesday while attempting to land at Connecticut's largest airport, officials said.

Connecticut Department of Emergency Services and Public Protection Commissioner James Rovella said at a news conference that there were 13 people on board the plane at the time, including 10 passengers and three crew members. Rovella added that one person was also on the ground in a maintenance facility when the plane crashed at Bradley International Airport in Windsor Locks, Conn., located north of Hartford.

"Victims are very difficult to identify," Rovella said, "We don't want to make a mistake."

The Federal Aviation Administration said in a statement a Boeing B-17 crashed at the end of Runway 6 while attempting to land.

"It is a civilian registered aircraft, not flown by the military," federal officials said.

A state official told The Associated Press five people had died, speaking on condition of anonymity.

Connecticut Airport Authority Executive Director Kevin Dillon said at a news conference the four-engine, propeller-driven took off at 9:45 a.m. before the pilot indicated to the tower the aircraft was "experiencing some kind of problem."

The aircraft attempted to land at New England's second-busiest airport but lost control upon touchdown, striking the airport's deicing facility at 9:54 a.m. as pilots were circling back to land.

"My heart really goes out to the families," he told reporters.

A spokesperson from Hartford Hospital told Fox News that the facility has received six patients, with one arriving by Lifestar helicopter and the five others by ambulance.  Three people were being treated with critical injuries, two with moderate injuries, and one with a minor injury, officials said at a news conference.

Bradley International Airport said in a statement on Twitter the accident involved a Collings Foundation World War II aircraft. Airport officials closed the airport for several hours and the FAA has placed a ground stop for flights that were destined for the airport.

"We have an active fire and rescue operation underway. The airport is closed," officials said.

The airport said by 1:40 p.m. it had reopened. Dillon said the airport was anticipating to reopen with one runway in operation, keeping the other runway where the accident took place closed. He warned that there would be numerous cancellations throughout the rest of the day.

In the moments after the crash, a fire with black smoke rose from the airport as emergency crews responded to the site. Aerial images showed the tail of the aircraft around charred debris, in addition to foam sprayed in the area by fire crews.

The crash happened around 10 a.m. at Bradley International Airport in Connecticut. (Tony Arreguin)

A witness told FOX61 he saw the plane take off but heard the engines "definitely struggling."

Another witness, Brian Hamer, said the plane took off but did not climb very high.  He told FOX61 he saw one of the aircraft's engines fail and the plane attempted to return to the airport.

"A minute or so later, a big rumble," he said, adding he then saw smoke.

Antonio Arreguin told the AP he had parked at a construction site near the airport for breakfast when he heard an explosion. He said he did not see the plane but could feel the heat from the fire, which was about 250 yards away.

"In front of me, I see this big ball of orange fire, and I knew something happened," he told the AP. "The ball of fire was very big."

Arreguin reported a small explosion after the initial blast as emergency crews rushed to the scene.

A Lifestar medical helicopter was called to the scene, as emergency responders rushed to the area, according to FOX61.

A Boeing B-17 bomber was on tour in the area when it crashed while attempting to land at Bradley International Airport in Connecticut on Wednesday. (Aaron Katzman)

Lamont said earlier on Twitter that several state agencies, including state police and the Department of Energy and Environmental Protection, are on scene responding to the accident.

"Such an unfortunate situation with an historic aircraft," Lamont said. "Our prayers are with everyone who was on board."

The New England Air Museum is located near the airport. Airport officials said the plane was associated with the Collings Foundation, an educational group that brought its "Wings of Freedom" vintage aircraft display to Bradley International Airport this week.

"Our thoughts and prayers are with those who were on that flight and we will be forever grateful to the heroic efforts of the first responders at Bradley," the foundation said in a statement to Fox News. "The Collings Foundation flight team is fully cooperating with officials to determine the cause of the crash of the B-17 Flying Fortress and will comment further when details become known."