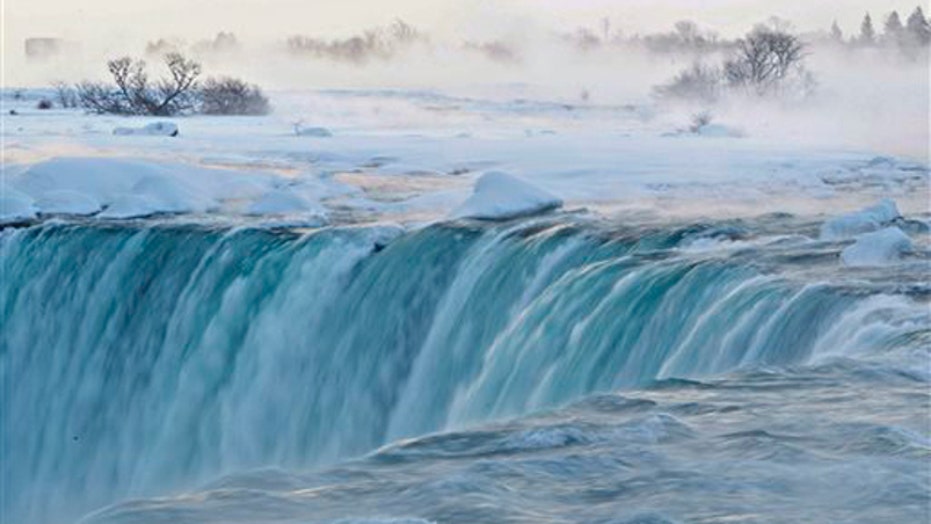 Dangerous cold snap plunges half of US below freezing

The bitter cold that has gripped the Eastern U.S. is showing no sign of letting up before the weekend.

The National Weather Service says the newest band of Arctic air could plunge parts of the Southeast and Mid-Atlantic into deep freezes that haven't been felt since the mid-1990s.

Temperatures and wind chills on Thursday dipped near zero or below in the Midwest, Northeast and even the South — where people are unaccustomed to the weather-related road hazards, school cancellations, and runs on supplies.

The cold snap followed snow and ice storms earlier in the week. The low temperatures caused much freezing and refreezing of snow, ice and roads. Weather forecasters warn that more sleet and freezing rain will be possible in the coming days.

Here's a look at the latest weather and the effect it is having around the country:

YOU THINK IT'S COLD WHERE YOU ARE?

Temperatures dropping close to 0 degrees where you are? That's nothing to folks in Embarrass, Minnesota.

On Thursday, the community reported a temperature of 41 below zero — without the wind-chill factor.

Elsewhere in Minnesota, it was 31 below zero in Ely and Fosston, and 28 below at Bemidji.

The National Weather Service issued a wind-chill advisory for parts of the state.

Bitter cold temperatures have broken records in Washington and Baltimore.

And in Baltimore, Thursday's high of 18 degrees broke the record of 19 degrees set in 1903.

Delaware State Police say at least 16 children suffered minor injuries when three school buses they were riding were involved in a chain-reaction crash.

It happened about 4 p.m. Thursday on Adams Road in Bridgeville. Troopers say three school buses were traveling north when the first bus slowed because of icy road conditions.

Officers say the third bus slid on the ice and rear-ended the second bus, which then hit the first bus.

Authorities say the buses were carrying 3rd- to 5th-grade students from the Woodbridge School District.

Police say at least 16 children were taken to area hospitals. The bus drivers were not hurt.

Troopers say no charges are expected to be filed.

BACK TO SCHOOL IN CHICAGO

District officials ordered a cold-weather day for Thursday, when temperatures stayed in the single digits. The wind made it feel like temperatures were double digits below zero. Numerous other school districts were also shut down.

The weather service is forecasting high temperatures near 20 in northeastern Illinois for Friday, with wind chills near 15 to 25 degrees below zero in the morning. They are also forecasting light snow, with little or no accumulation.

Firefighters in Revere, Massachusetts, rescued a man and his two dogs from an icy marsh.

Authorities say the dogs ran into the marsh Thursday morning and became stranded when a piece of ice they were on floated about 500 feet from the shore. The man tried to rescue the dogs, but got stuck in waist-high water and started having chest pains.

Firefighters pulled the man to safety and brought him to Massachusetts General Hospital. His name and condition haven't been released.

Rescuers then used an ice sled to retrieve the dogs from the floating ice. One of the dogs was uncooperative at first and bit the hand of a firefighter, who wasn't seriously hurt.

The dogs are OK.

Homeowners struggling with ice dams that prevent melted snow from dripping off their roofs have a sympathetic ear from Massachusetts Gov. Charlie Baker.

He said Thursday that he and his wife are dealing with ice dams and icicles at their home. During his monthly "Ask the Governor" radio program, he described placing pots and pans, plastic bags and towels around the house to collect leaking water that is then dumped into a bathtub each morning.

Baker said he even climbed on his roof at one point to clear off snow.

It's a familiar scenario for thousands of homeowners after storms have left several feet of snow on roofs, leading to costly damage from ice dams and the threat of roof collapses.

The cold might not bother Disney's Queen Elsa, but it's wreaking enough havoc in Kentucky that police announced a joke warrant for the "Frozen" character's arrest.

Police in the rural town of Harlan posted on Facebook: "Suspect is a blonde female last seen wearing a long blue dress and is known to burst into song 'Let it Go!' As you can see by the weather she is very dangerous."

But they soon posted another message, advising residents to take the weather seriously, all kidding aside.

In southeastern Virginia, a program helps residents shovel out if they can't do it themselves — but it says it needs volunteers.

With parts of Virginia under nearly a foot of snow, the team has received more than 100 requests. Priority is given to the elderly, sick, disabled and single mothers.

Arctic conditions have turned a geyser at a state park in western New York into a five-story-tall "ice volcano."

The geyser is in a pond near the Glen Iris Inn at Letchworth State Park. Days of subzero temperatures have formed a solid cone of ice several feet thick with water still spouting out of the top.

Winter is normally a quiet season for the park, known as the "Grand Canyon of the East" for its scenic gorges, but dozens of people are showing up daily to see the "volcano."

In South Carolina, the start of the three-day Bassmaster Classic is being delayed about 90 minutes, pushing first launch to about 8:30 a.m. Friday when temperatures are forecast to be 17 degrees.

Still, the competitors will cast their lines amid finger-chilling temperatures when they head out on sprawling Lake Hartwell, located along the border of South Carolina and Georgia.