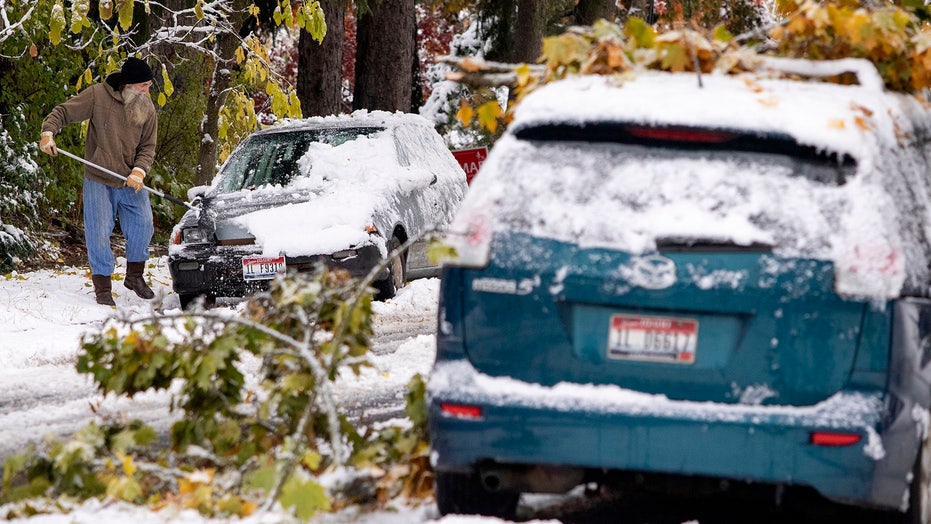 A major early-season winter storm is spreading snow and freezing rain into the Plains on Monday as extreme fire weather conditions continue out in California.

The storm system that dropped snow over the Rockies over the weekend is bringing extremely cold air, snow, ice, blizzard conditions and flooding rainfall to parts of the Southwest into the central and southern Plains.

"We are dealing with a snowstorm, an ice storm over parts of Texas, Oklahoma," Fox News senior meteorologist Janice Dean said on "Fox & Friends." "This is a big deal because it is so early on in the season."

WHICH WERE THE WORST BLIZZARDS? HERE ARE THE DEADLIEST STORMS IN HISTORY

Winter storm warnings stretch from Colorado into New Mexico and the Texas and Oklahoma panhandles, with winter weather advisories expanded all the way east into western Missouri.

More than a foot of snow will be possible across the higher elevations with 6 inches or more for the Southern Plains.

This photo released by the U.S. Forest Service shows significant snowfall near where officials have been battling the Cameron Peak Fire in Colorado. (US Forest Service)

"Some of these areas are getting more snow than the Northeast so far this year," Dean said.

Tim Daulton clears snow off of his car across the street from a car with small tree branches on it on Saturday, Oct. 24, 2020, in Moscow, Idaho. (Geoff Crimmins/The Moscow-Pullman Daily News via AP)

An unusually cold air mass across the Rockies and Central Plains will help fuel this wintry event.

Branches broke off of trees throughout Idaho over the weekend after wet snow fell on trees that haven't lost their leaves yet. (Geoff Crimmins/The Moscow-Pullman Daily News via AP)

A dangerous ice storm is expected for northern Texas into western Oklahoma on Tuesday, along with record cold temperatures with bitter wild chills also widespread.

Freezing rain is expected to bring "significant amounts" of ice to parts of Texas and Oklahoma, making for dangerous travel in the region.

A dangerous ice storm is forecast to develop over the Plains into Tuesday. (Fox News)

"We're going to be potentially seeing an ice storm tomorrow with measurable ice on the roads and the power lines," Dean said. "That is going to be a significant impact for this area."

The fire danger is critical to extreme from California to the Southwest with dry conditions, warm temperatures, and gusty winds through the next few days.

Santa Ana winds will affect Southern California, with winds that could also cause downed trees and power outages.

The winds are associated with the blast of arctic air bringing the snow to the nation's midsection.

Widespread wind and red flag warnings are in place.

Fire flag warnings stretch through the West and California on Monday due to critical to extreme fire danger. (Fox News)