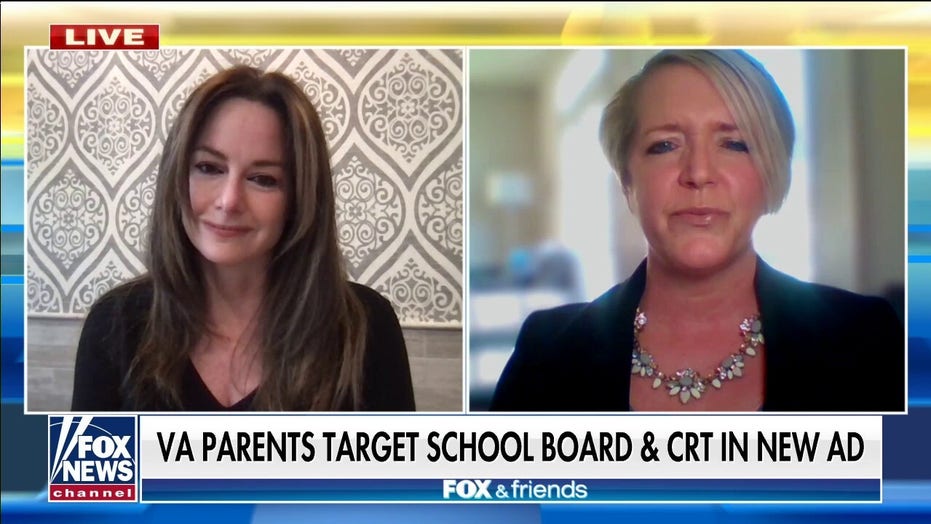 Loudoun County, Virginia parents Elicia Brandy and Cheryl Onderchain tell ‘Fox and Friends’ they launched an ad campaign against the school board over its embrace of critical race theory.

What exactly is critical race theory? The answer to that question appears to have eluded many, as controversies over racial diversity trainings and curricula have swept the nation in recent months.

Often compared by critics to actual racism, CRT is a school of thought that generally focuses on how power structures and institutions impact racial minorities. According to Encyclopedia Britannica, the first annual CRT workshop took place in 1989 but its origins go back as far as the mid-20th century with the development of a more general precursor known as critical theory.

Advocates of these ideas view the world through the lens of power relationships and societal structures rather than individuals. The movement itself came in reaction to the perceived failures of classical liberalism in the 19th and 20th centuries. Race, according to this view, is a relatively recent social construct that is weaponized by dominant groups to oppress others.

While institutions have been mulling these ideas for years, the aftermath of George Floyd's death seemed to amplify its influence across the country. A so-called "racial reckoning" has seen the propagation of various ideas that are often associated with CRT. Certain buzzwords like "systemic racism" or "implicit bias" have emerged in school districts' diversity statements, corporate trainings, educational materials, and government agencies.

Part of the problem defining CRT is that its contours are so vague. Law professor Kimberle Crenshaw, one of CRT's progenitors, writes that the theory itself is a verb rather than a noun.

"CRT is not so much an intellectual unit filled with stuff – theories, themes, practices and the like – but one that is dynamically constituted by a series of contestations and convergences pertaining to the ways that racial power is understood and articulated in the post-civil rights era," she said.

She went on to say: "I want to suggest that shifting the frame of CRT toward a dynamic rather than static reference would be a productive means by which we can link CRT’s past to the contemporary moment."

That vagueness has played out nationwide, with institutions disputing constituents' claims that they're implementing CRT. There even seems to be confusion within institutions like Loudoun County Public Schools, in Virginia, which despite denying teaching CRT reportedly coaches its employees on that very concept.

In the fallout of mass confusion, many have focused their criticism on what they say CRT manifests — divisive ideas about race, collective guilt for dominant groups, and assigning racial significance to seemingly neutral concepts. The previous U.S. administration and various states attempted to restrict the theory's spread by referring more generally to those ideas.

Most notably, states like Oregon and Virginia have come under fire for promoting ideas about racist structures in mathematics. One program in particular alleged that White supremacy infiltrated math classrooms and manifested itself in the focus on finding the "right answer." It similarly blamed White supremacy for objectivity as "the belief that there is such a thing as being objective or ‘neutral.'"

Defenders argue that CRT-type training helps enhance dominant groups' understanding and empathy of what the oppressed experience on a regular basis. These types of trainings have also been promoted as ways to "dismantle" or weaken alleged structures imposing burdens through bias and discrimination.

Attorney M.E. Hart, who has conducted these types of training sessions, told The Washington Post that the training helped people live up to "this nation’s promise — ‘We hold these truths to be self-evident, that all men are created equal.'"

Critics, however, say it's a form of "neo-racism" that's ripping apart society. That's why activists like Chris Rufo have pursued a legal strategy of challenging CRT-based trainings through civil rights lawsuits.

"Critical race theory is a grave threat to the American way of life," Rufo said in announcing a legal coalition in January. "It divides Americans by race and traffics in the pernicious concepts of race essentialism, racial stereotyping, and race-based segregation—all under a false pursuit of 'social justice.'"

He continued: "Critical race theory training programs have become commonplace in academia, government, and corporate life, where they have sought to advance the ideology through cult-like indoctrination, intimidation, and harassment."