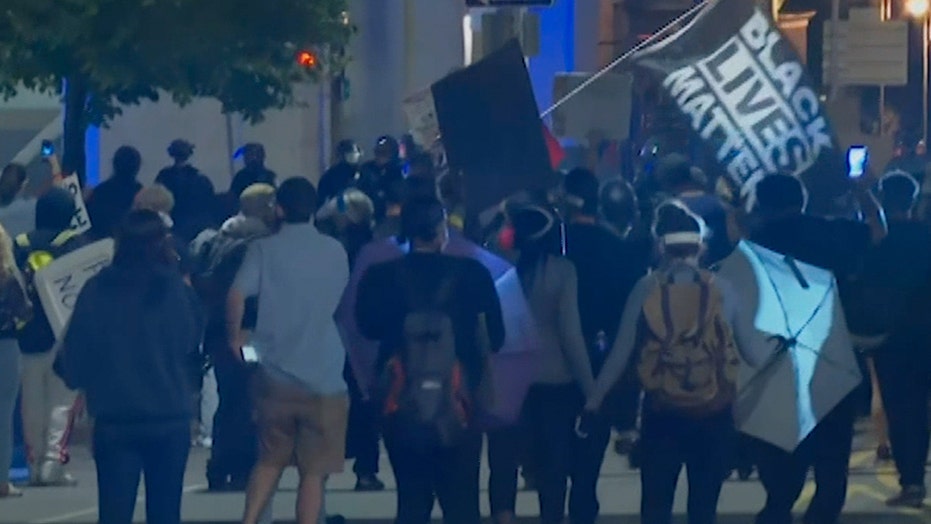 One of the Black Lives Matter protesters now facing felony rioting and misdemeanor graffiti charges — after a window-smashing free-for-all in Manhattan — is a wealthy Upper East Sider whose mother is an architect and whose father is a child psychiatrist.

Clara Kraebber, 20, is one of eight people arrested Friday night after a roiling, three-hour rampage that police say caused at least $100,000 in damage from Foley Square up to 24th Street.

“Every city, every town, burn the precinct to the ground!” the group chanted as it moved up Lafayette Street while busting the plate glass facades of banks, Starbucks and Duane-Reades.

The protest was organized by groups calling themselves the “New Afrikan Black Panther Party” and the “Revolutionary Abolitionist Movement.”

Given her privileged upbringing, Kraebber might seem an unlikely alleged revolutionary in those ranks.

Kraebber’s mother, Virginia Kindred, runs Kindred Arch.Works, a Manhattan architect firm that has designed spaces for Columbia University and NYU, and worked on numerous school and business spaces throughout the city.

Her father is Markus Kraebber, an Upper East Side child and adolescent psychiatrist who teaches at the Columbia University Department of Psychiatry.

In 2016 the family paid $1.8 million for their 16th-floor apartment on East End Avenue. The family also owns a 1730 home — featuring four fireplaces, according to property listings — in tony Litchfield County, Conn.

But Kraebber has joined in street protests for years before allegedly taking part in Friday night’s march.

She is now facing a maximum of four years prison on her top charge of first-degree riot.

“We don’t have much political power right now, being youths, but this is something we can do,” she told The New York Times in 2014, explaining why she joined a Manhattan rally on behalf of Ferguson, Mo., police-brutality casualty Michael Brown.

She was a 14-year-old student at the elite Hunter College HS at the time.

Now, she is a history undergrad at Rice University in Houston, according to her Facebook page — where the most recent photo, from June, shows her grinning ear to ear while holding a goat.

As a member of the Rice Young Democrats, she helped work on Beto O’Rourke’s 2018 failed bid to unseat Sen. Ted Cruz.

She donated $121 to the Rice Young Democrats PAC.

“Does Beto make you feel this way too??? THEN GO VOTE!!!” she captioned a Facebook photo showing her looking up, earnestly, at the candidate.

Clara Kraebber didn’t have much to say when reached by phone at her second home in Connecticut Friday night.

“This is the height of hypocrisy,” one law enforcement source who was at the protest told The Post.“This girl should be the poster child for white privilege, growing up on the Upper East Side and another home in Connecticut.

“I wonder how her rich parents feel about their daughter. How would they feel if they graffitied their townhouse?”