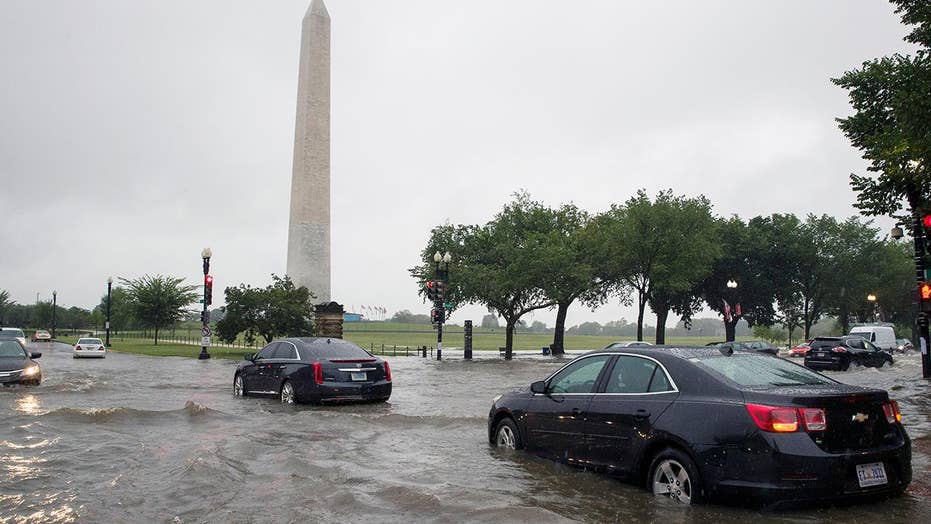 A morning rainstorm creating a treacherous commute across the nation’s capital on Monday, as numerous roads were washed out amid flash flooding -- and even the White House basement ended up getting soaked.

"If you are in this FLASH FLOOD EMERGENCY area, travel will be EXTRAORDINARILY dangerous, including washouts, #flooding over roads. Stay out of low areas, if in a low area that may flood, seek higher ground," the agency warned on Twitter. "Stay off the roads if at all possible. This is not the 'usual' flooding."

Fox News Meteorologist Adam Klotz said on "America's Newsroom" the conditions for major flooding came together directly over the area.

"It's a little bit of a surprise, actually," he said. "We knew there was rain moving across the region, it has just really piled up in a particular spot."

Motorists are stranded on a flooded section of Canal Road in Washington during a heavy rainstorm, Monday, July 8, 2019. (Dave Dildine/WTOP via AP)

The ground across the capital region was already saturated, having seen up to six inches of rain in the past week, according to Klotz.

"That means this additional rain, where you've seen a couple of inches of the past couple of hours, there's nowhere for it to go," Klotz said.

NWS meteorologist Cody Ledbetter told the Associated Press the storm dumped about 6.3 inches of rain near Frederick, Maryland, about 4.5 inches near Arlington, Virginia, and about 3.4 inches at Ronald Reagan Washington National Airport in a two-hour period.

The press workspace in the basement near the White House's West Wing was soaked by rainwater on Monday.

Water gushed into the press workspace in the basement near the White House's West Wing, creating a large puddle.

Vacuums had to clean press workspace in the basement near the White House's West Wing that got soaked by rainwater on Monday.

Emergency crews across the area were dispatched to multiple water rescues in areas like Germantown, Frederick, Fairfax County and in Washington D.C., FOX5 reported.

One video posted by  Niina Farah, showed water pouring through an opening in the roof and onto the tracks at the Virginia Square-GMU Station, according to FOX5.

Another video by Nick Scalera showed water streaming in through an elevator at Pentagon Metro.

A spokesman for the Montgomery County Fire Department, Pete Piringer, said that emergency workers in the Maryland county used boats for dozens of rescues, plucking people from flooded cars. There were no reports of storm-related injuries, but several accidents were also reported.

Klotz said that the line of storms has since moved south of the metro area, and that clearing skies will give the area a chance to dry off as the day progress. After this morning's onslaught, dry conditions are expected to continue this week, according to Klotz.

Fox News' Matt Leach and the Associated Press contributed to this report.