Video: Officers shoot man after telling him to drop gun 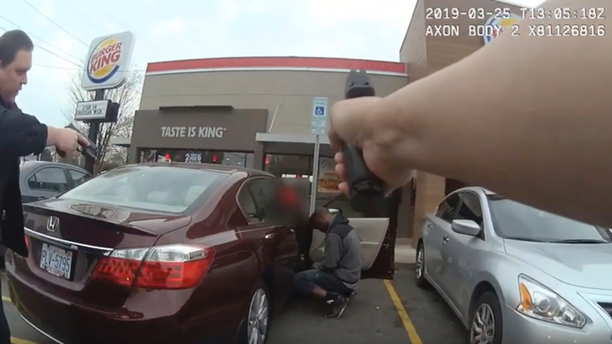 Police video released Monday shows an officer in Charlotte, North Carolina, fatally shooting a man who was armed but didn't point his weapon at authorities.

The body camera footage shows two officers approaching 27-year-old Danquirs Napoleon Franklin outside a Burger King on March 25 after witnesses called 911 to report a man with a gun acting in a threatening manner.

The police video shows officers repeatedly yelling for Franklin, who is black, to put his gun down. He's seen squatting by the open door of a car, facing someone in the passenger seat.

"Sir, put the gun down," says the officer wearing the body camera. "Drop the gun!"

Franklin doesn't move as police approach him, the video shows. As they shout at him, Franklin can be seen raising his right hand with an object in it, still facing the person in the passenger seat.

He lowers his hand right around the time when the first of two shots by the officer can be heard on the video. "Shots fired!" the officer yells into her radio. About 40 seconds had passed from the time the officer exited her cruiser to when Franklin was shot.

She then reaches under his body and can be seen picking up a handgun, saying: "I gotta pick up the gun."

The officers tell the person in the passenger seat, "Let me see your hands," and the person holds them out on the dashboard. In response to an email seeking the person's identity, police spokesman Lt. Brad Koch replied, "This is still an active criminal investigation."

Corine Mack, president of the Charlotte-Mecklenburg NAACP chapter, summed up her reaction to the video in four words: "Hurt, disgust, anger, frustration." But she said anyone who chooses to protest in response to the release should do so peacefully.

She said the officer didn't follow procedure and "didn't view Danquirs Franklin as a man, but saw him as a danger."

"This female officer shot this man while he was adhering to her commands," she said in a phone interview.

Robert Dawkins of Safe Coalition NC said violence and taking to the streets won't solve anything, and he doesn't anticipate it happening.

A handful of protesters gathered in a downtown Charlotte park around 6 p.m., with more expected. Clergy members were also slated to meet at a local church before making their own pleas for peaceful protest.

Before the release of the footage, Charlotte leaders held a news conference to urge community members to be calm after seeing what's on it. They noted that protests had been planned even before the video's release. No protesters were seen at the Burger King on Monday afternoon, shortly after the video came out.

Mayor Vi Lyles urged the community to engage in a peaceful discourse about what happened.

"It is in moments like this that we can open for a discussion and discourse. We can talk about what's on that video," she said. "But what I always think about is how we respond as a community will reflect how we honor the memory of Danquirs Franklin."

Police Chief Kerr Putney said the video is hard to watch, but it shows that Franklin was armed.

"There is clear and compelling evidence that Mr. Franklin is armed. You will see that" on the video, Putney said at a news conference.

Putney said Monday that the video is consistent with what police have said all along, that Franklin refused to drop his weapon and an officer fired after perceiving a lethal threat.

Before the shooting, one witness who called 911 said that an armed man had entered Burger King and tried to start a fight with employees.

"Can you please send somebody quickly? Please. He got a gun. ... He's pointing it," she said.

But since the shooting, some have questioned whether police were too quick to use lethal force, including students who walked out of a school to protest the shooting days after it happened.

The officer who shot Franklin was identified as Officer Wende Kerl, who has worked for the department since 1995. She has been placed on administrative leave while the shooting is investigated by detectives, who will turn their findings over to the district attorney. A department spokesman has declined to release Kerl's race.

The video was released Monday by a judge in response to a media petition.

Franklin's death came less than three years after another fatal shooting by a police officer sparked several days of civil unrest in Charlotte, including injuries and property damage. A prosecutor later cleared the officer in the September 2016 shooting of Keith Lamont Scott after reviewing evidence including surveillance footage indicating he had a holstered gun on his ankle.