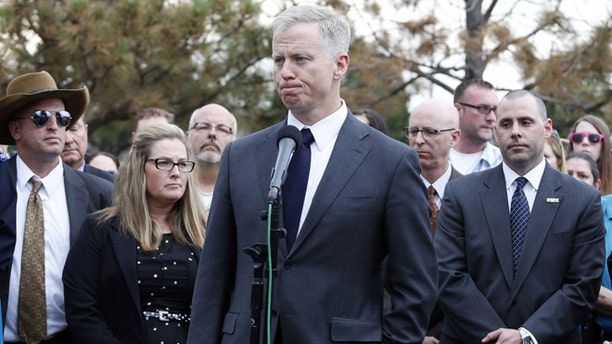 The decision by jurors Friday to sentence theater gunman James Holmes to life in prison instead of death drew cries of outrage and disappointment from families of the victims as well as some law enforcement officials.

The nine women and three men of the jury said they could not reach a unanimous verdict on each of the murder counts. That automatically eliminated the death penalty for Holmes, who blamed his calculated killings of 12 people on mental illness.

That meant Judge Carlos A. Samour, Jr. will sentence Holmes to life in prison without the possibility of parole after a three-day sentencing hearing starting Aug. 24.

Gasps and tears were heard in the courtroom as the verdicts were read. One man, believed to be related to one of the victims, got up and stormed out as the first of the verdicts -- one for each victim -- was announced by Samour.

"We always knew this was a possibility. I'm thinking a dark knight rises and infiltrates the jurors."

Other family members sitting in court were sobbing as the verdicts were read, some with their heads in their hands and some shaking their heads in disgust.

Ashley Moser, a survivor of the shooting who was left paralyzed, cried and had her head in her hands as the name of her daughter, Veronica Moser-Sullivan, was read.

"We always knew this was a possibility," he said outside the courthouse on Friday. "I'm thinking a dark knight rises and infiltrates the jurors."

Sullivan expressed his belief that one juror had “infiltrated” the jury to make sure the death penalty was never on the table.

He added that the verdict worsened the “gaping wound” that has plagued his family.

The courtroom was also full of first responders, especially Aurora Police Department officers, some of whom cried along with the families as the verdicts were read.

Police Sgt. Michael Hawkins, who carried Moser-Sullivan out of the theater and tried to save Jessica Ghawi's life, was in tears. Before the hearing began, Ghawi's mother, Sandy, came up to the officer and thanked him for trying to save her daughter’s life. 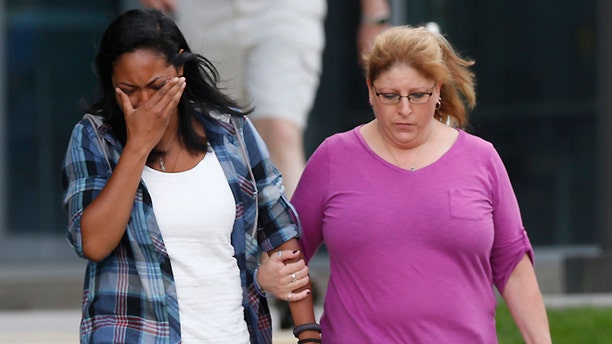 Lasamoa Cross, left, wipes tears from her face as she leaves the Arapahoe County Courthouse with Theresa Hoover, the mother of her boyfriend, Alexander J. Boik, who was killed in the theatre massacre Friday, Aug. 7, 2015, in Centennial, Colo. Jurors failed to agree on a death sentence for Colorado theater shooter James Holmes, prompting shocked sobs from victims, police officers and his own mother. (AP Photo/David Zalubowski)

Ghawi’s brother tweeted his dismay over the decision, saying that “This trial should have never happened.”

“Defense offered a plea to life in prison, but political ambition trumped reason,” he also wrote on his twitter page.

After the hearing, District Attorney George Brouchler met with the victims’ families and officials from Aurora and expressed his disappointment.

"Those jurors did a hell of a job. They were called upon to do things that a lot of people wouldn't do," he said after reading a list of the victims' names. “"Though I'm disappointed with the outcome, I'm not disappointed with the process. ... I still think death is justice for what that guy did but the system said otherwise and I honor that."