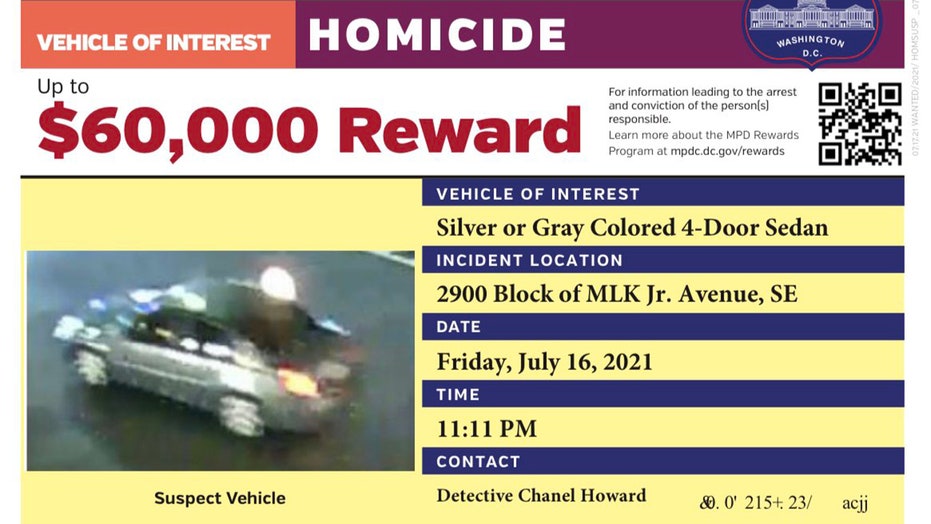 The vehicle used in a drive-by shooting in Washington D.C. that left a six-year-old girl dead and five others wounded was found burned, according to a report Monday.

The car was captured on surveillance footage driving away from the shooting on Friday that killed Nyiah Courtney, 6, as she was riding her scooter on the sidewalk in the neighborhood of Congress Heights. A manhunt is underway for the suspects.

On Monday, police said they found the vehicle. Sources told WTOP that it was burned.

Investigators are examining it with the hope of finding evidence that could lead them to those responsible, according to the station. It was unclear when or where the vehicle was found.

The child’s mother and four other adults were injured in the shooting.

Police said they were offering a reward of up to $60,000 for information that leads to an arrest in the case.

"She was starting the first grade this fall and now that won’t happen and frankly that is unacceptable to me and it should be to every resident," Metropolitan Police Department Chief Robert Contee said of Courtney during a news conference on Saturday.

The vehicle of interest used in the shooting that that killed Nyiah Courtney, 6, and wounded five others.  (Metropolitan Police Department)

Community members confronted Mayor Muriel Bowser and city officials at the news conference. They demanded immediate action against nearby liquor stores they said were attracting violence in the area.

$60K REWARD OFFERED AFTER CHILD KILLED, 5 OTHERS SHOT IN DC

Bowser and Contee stressed that the community also needs to help the police, who were directed Monday to use as much overtime as is necessary to combat gun violence.

"The cowards who committed this crime came into this community, without any regard for human life, without regard for Nyiah's life, and opened fire. That cannot and will not be tolerated. It is time for us to say enough is enough," Contee said.

Washington, like many other large cities in the U.S., is seeing a spike in violent crime and homicides. As of Monday, the Metropolitan Police Department reported 103 killings. The city experienced 198 for all of 2020, according to police figures.

Louis Casiano and the Associated Press contributed to this report