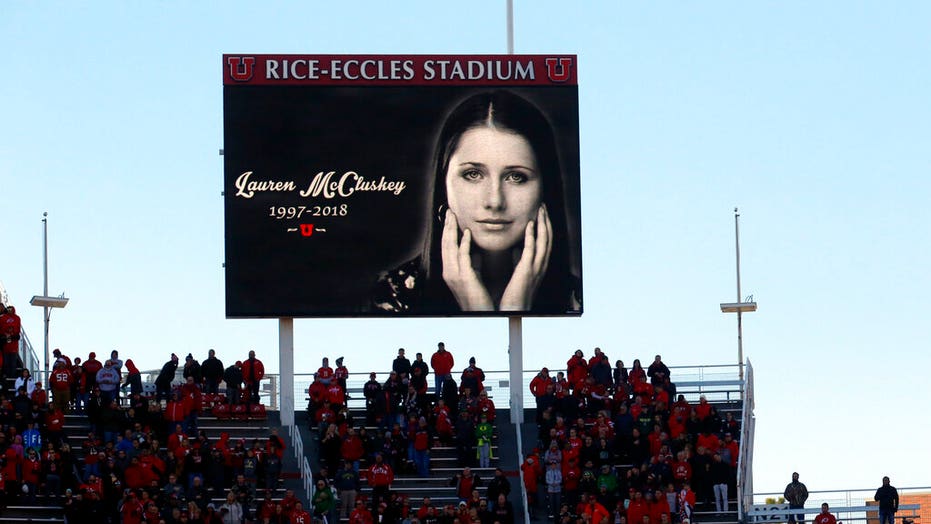 A University of Utah police officer is under investigation for allegedly keeping explicit photos of a 21-year-old college student before her 2018 shooting death.

Officer Miguel Deras has denied the allegations unearthed by the Salt Lake Tribune, which quoted unnamed officers saying he had supposedly "bragged" about having the explicit images of track athlete Lauren McCluskey before her murder.

"He never shared the photos in question, and certainly not in the manner described," his attorney Jeremy Jones said in a statement.

FILE: A photograph of University of Utah student and track athlete Lauren McCluskey, who was fatally shot on campus, is projected on the video board before the start of an NCAA college football game between Oregon and Utah in Salt Lake City.  (AP)

Deras received the photos on his department email as part of McCluskey's extortion report, and accessed them on his personal phone because officers did not have department phones at the time, Jones said. He brought up the photos during a routine briefing to ask how they should be handled and stored.

Chief Rodney Chatman said he is concerned about the thoroughness of an internal probe by the campus police department. The officers who conducted it have been placed on administrative leave while the Utah Department of Public Safety completes a new investigation.

"It is inexcusable for a police officer to inappropriately share or discuss photos or information provided by a victim seeking justice," said Chatman, who was hired after other missteps in the McCluskey case sparked a backlash.

He pledged to release the results of the new probe publicly, in an effort to help the department "regain credibility" since McCluskey's death.

The 21-year-old had contacted university police more than 20 times before her death to report harassment by a man she had dated, Melvin Shawn Rowland.

Her family says in a lawsuit that those reports were not taken seriously by campus police, who should have quickly discovered he was a registered sex offender on parole who had been lying to her about his name, age and history. Instead, he fatally shot her with a borrowed gun on campus and later killed himself.