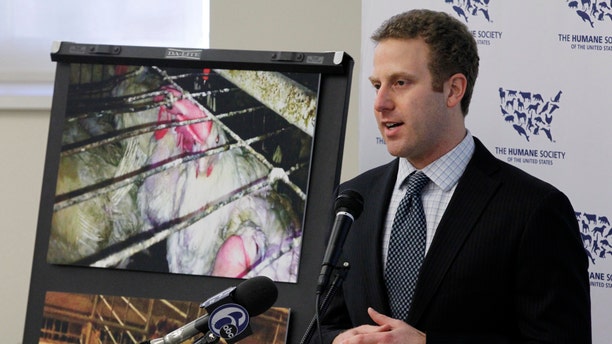 April 12: Josh Balk, a spokesman for The Humane Society of the United States, speaks during a news conference in Philadelphia. (AP)

An undercover investigation at a central Pennsylvania egg farm found hens suffering in severely overcrowded cages, along with mummified bird carcasses, thick layers of dead flies and other "deplorable" conditions, officials with the Humane Society of the United States said Thursday.

The group's six-week probe in February and March at a Kreider Farms facility in Manheim found many of the birds did not have enough room to spread their wings and were sick or injured, said Josh Balk, the society's director of corporate policy for farm animal protection.

"Their quality of life is miserable day after day after day," said Wayne Pacelle, the society's president. "This situation is intolerable."

Pennsylvania is the nation's third-largest egg producing state. Kreider Farms is among its largest egg producers, supplying eggs, milk and other products to retail stores in the mid-Atlantic region.

Ron Kreider, the company president, called the probe "a gross distortion of Kreider Farms, our employees and the way we care for our birds."

"We are leading the industry by tearing down old, traditional-style egg houses and replacing them with new, state-of-the-art facilities," Kreider said. "More than 80 percent of our chickens are housed in larger, modern cages. By comparison, 80 percent of U.S. caged egg production still houses birds in older, traditional style cages."

The Humane Society also is calling for more support of federal legislation that would improve conditions for hens. Among other things, the legislation would require phasing in new housing for hens that would provide the animals more space and contain perches and nesting areas.

"More regulation would actually benefit Kreider Farms," he said in the statement. "With our state-of-the-art facilities, we would have the least to do to comply."

The Humane Society also said it found instances of salmonella at Kreider.

A company spokeswoman, Laura W. Koster, said in a statement that three older chicken houses recently tested positive for salmonella, but that no eggs tested positive. There was no health risk and the areas were later retested and cleared, Koster said.