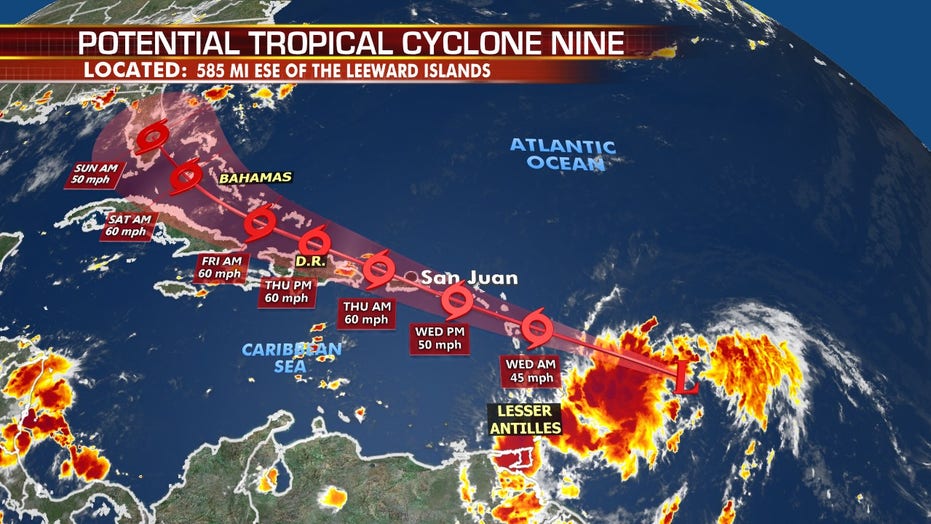 An already active 2020 Atlantic hurricane season is showing no signs of slowing down, with the next system already knocking on the door of the Caribbean.

The U.S. National Hurricane Center (NHC) in Miami said a tropical disturbance located about 550 miles east of the Lesser Antilles is expected to develop into Tropical Storm Isaias by Tuesday night.

The system currently has maximum sustained winds of 40 mph, with strengthening expected over the next 48 hours.

The official forecast from the NHC has Isaias reach tropical-storm strength by Tuesday night and then moving through the Leeward Islands on Wednesday.

The forecast track of Potential Tropical Cyclone Nine, which would be Tropical Storm Isaias. (Fox News)

The storm then is forecast to move across Puerto Rico Wednesday night into Thursday morning, where tropical storm warnings are now in effect.

Tropical storm warnings have been issued for Puerto Rico and the Leeward Islands. (Fox News)

According to the NHC, tropical-storm-force winds could extend outward up to 230 mins from the center of the storm, primarily northeast of the center.

"It is important to not focus on the exact track of the system," the NHC tweeted Tuesday afternoon. "The disturbance is large and heavy rain and gusty winds extend far from the center."

Tropical storm conditions are expected to spread across the U.S. and the British Virgin Islands and Puerto Rico Wednesday through Thursday morning.

Total rain amounts can be expected to 3 to 6 inches, with up to 10 inches possible.

"This rainfall may produce life-threatening flash flooding and mudslides, as well as potential riverine flooding," the NHC said.

Heavy rain is possible over the next couple of days over Puerto Rico.

The longer-range forecast for this future tropical storm is highly uncertain, as environmental conditions and land interaction could very well keep this system from further organizing late this week and over the weekend.

"The good news here is that the upper-level conditions in the atmosphere are not allowing the storm to strengthen, but we're still going to have to watch it over the next couple of days as it comes very close to Florida and the East Coast next week," Fox News senior meteorologist Janice Dean said on "Fox & Friends."

Beyond Puerto Rico, the Dominican Republic, Bahamas and Florida are advised to closely monitor changes with the forecast in the next days.

Colorado State University hurricane research scientist Phil Klotzbach said on Twitter the record for the earliest "I" storm in the Atlantic basin is Irene, which formed on Aug. 7, 2005.

Meanwhile, Gonzalo set yet another record last week, continued by Hanna, which went on to be this season's first hurricane and made landfall in Texas.

While eight named storms have developed so far, forecasts call for 13 to 19 named storms during the 2020 Atlantic hurricane season, which runs from June 1 to Nov. 30.