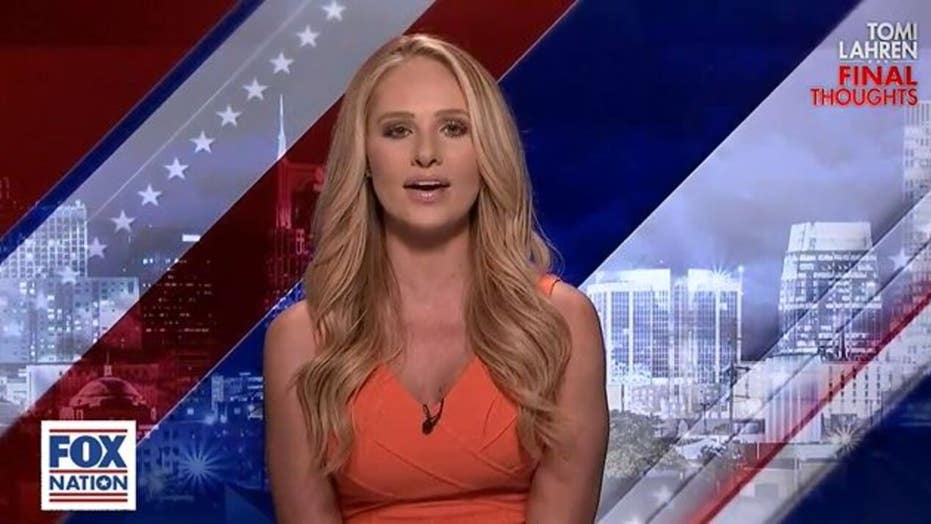 Tomi Lahren: This nation is still of the people, by the people and for the people

Fox Nation host Tomi Lahren on Monday slammed Democratic lawmakers that criticized the Fourth of July instead of celebrating our Independence Day.

"In a time when disparaging and otherwise dumping on this great nation has become not only commonplace but celebrated, I’d like to show the good ole US of A some well-deserved and much needed TLC," Lahren said on her Fox Nation show "Final Thoughts."

"And let me tell ya something else, even though I fear for our future and believe there’s a lot of fighting the good fight ahead of us, I don’t love this country any less just because Slow Joe  AKA Kamala Harris AKA The Squad is ‘running it,’" Lahren said. "No, my love for this nation is unconditional, as it should be. Because even at a time when America is being sadly and moronically put last, it is still the greatest nation on the face of the Earth."

Lahren's comments came after one Democratic lawmaker and several left-wing figures used the Fourth of July to share controversial statements or disparage the founding of the United States.

Democrat Rep. Cori Bush, D-Mo, tweeted out, "When they say that the 4th of July is about American freedom, remember this: the freedom they’re referring to is for White people. This land is stolen land and Black people still aren’t free."

There were some who agreed with Bush's comments, like congressional candidate Shahid Buttar. He replied to her tweet saying, "Speak it, @CoriBush! It’s almost as if our entire country has been brainwashed to ignore our history—and how its worst elements continue today—despite our self-congratulatory rhetoric."

Former MSNBC anchor Toure was far more vocal, tweeting out "F--k Independence Day. Not only were we not free, the whole reason the Colonies wanted independence was because Britain was moving toward abolishing slavery. Why would Black people celebrate a day so wrapped up in our enslavement?"

He also tweeted out his own opinion piece for the website The Grio titled "F--k Fourth of July: The only independence day I recognize is Juneteenth."

Actress Alyssa Milano also disparaged the Fourth of July by sharing a TikTok video of herself reading, "Reminder: The United States was founded on the unjust treatment of Native Americans, Africans and other people of color."

News organizations also took the opportunity to use the holiday to criticize the United States and its history.

NPR tweeted out a thread of the original Declaration of Independence, claiming it to be "a document with flaws and deeply ingrained hypocrisies." It also remarked immediately that the document "says ‘that all men are created equal’ — but women, enslaved people, Indigenous people and many others were not held as equal at the time."

Lahren argued that American greatness has to be "maintained and protected by defending our civil and personal rights and liberties."

"That means securing and protecting our borders. That means respecting and funding law and order. That means loving our fellow Americans as we do ourselves, even if they don’t think or vote the way we do," she said. "Some may feel this country, our flag, our anthem and our colors don’t represent them, and that’s fine. But let them not forget, we are one of the only places on earth where the right to vocally and expressively hate one’s own nation, is too, protected."