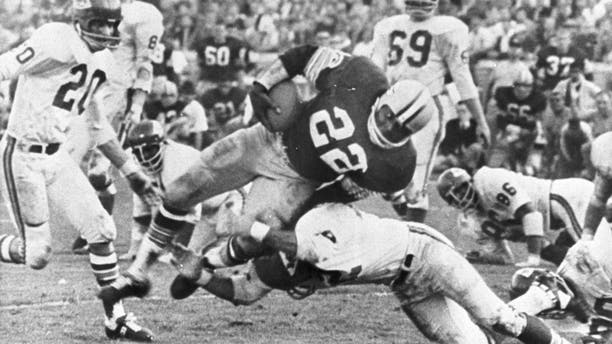 The Packers' Klijah Pitts (22) goes over right tackle to the Chiefs' five-yard line, a six-yard gain, before being brought down by Kansas City's Johnny Robinson in the fourth quarter of the Super Bowl game in Los Angeles Jan. 15, 1967. Three plays later Pitts went over for the touchdown as the Packers beat the Chiefs 35 to 10. Others include Bobby Hunt (20) and Sherrill Headrick (69). (AP Photo)

1967: The Green Bay Packers of the National Football League defeat the Kansas City Chiefs of the American Football League 35-10 in the first AFL-NFL World Championship Game, which would retroactively become known as Super Bowl I.