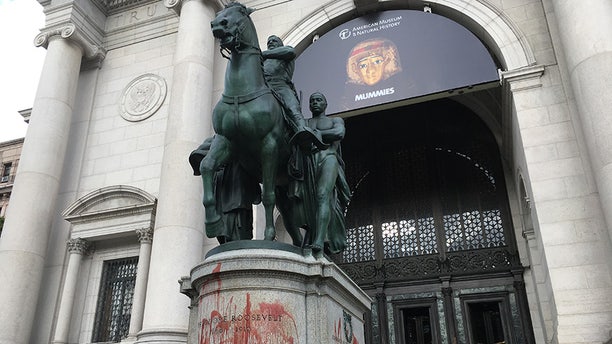 The Theodore Roosevelt statue at the American Natural History Museum was defaced with a red liquid. (Patrick Manning/Fox News)

A red liquid was splashed on the base of the Theodore Roosevelt statue outside the American Museum of National History in New York City early Thursday morning, police said, continuing a trend of vandalism of statues deemed offensive by certain groups.

The paint spray was discovered around 7:15 a.m. Thursday morning, said police, who believe the incident occurred sometime after 4 a.m. No words were written with the paint.

Erected in 1938, the 10-foot-tall statue depicts the nation’s 26th president on horseback, flanked by an indigenous man and an African-American man. 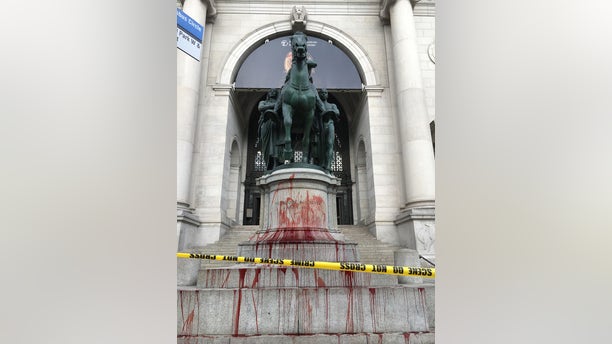 The statue, which sits on the steps leading up to the museum, has been a focal point of Columbus Day protests for several years. Activists claim it depicts racism, and white supremacy over other cultures.

“This is not a way to advance this conversation,” Anne Canty, a spokesperson for the museum told Fox News. “The mayor has opened [a] panel, looking at the question of statues. We refer people to that.” 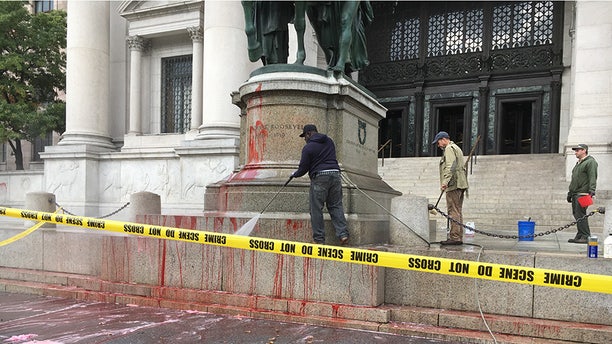 Workers with the New York City Department of Parks and Recreation clean up the Theodore Roosevelt statue. (Patrick Manning/Fox News)

No suspect has been identified and police said the investigation is ongoing. The city’s parks department said a crew has been sent to clean up the liquid.

The incident comes weeks after a similar liquid was splashed on a Christopher Columbus statue several blocks away.

“Hate will not be tolerated,” the unidentified vandal wrote on the Columbus statue along with “#somthingscoming.”