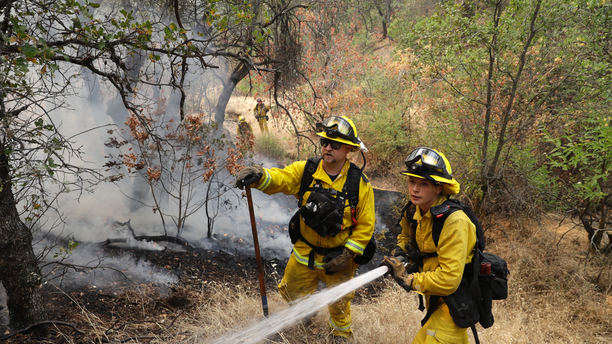 The Latest on wildfires burning in California (all times local):

Authorities say a deadly wildfire that forced thousands of evacuations in Northern California has grown slightly and containment remained at just 5 percent.

California Department of Forestry and Fire Protection officials reported Saturday that the number of structures destroyed climbed to 536 from 500. About 5,000 structures remain threatened.

The wildfire has badly damaged the small community of Keswick, swept through the historic Gold Rush town of Shasta and hit homes in Redding.

About 38,000 people remain under evacuation orders.

Two firefighters were killed and a family of three perished in the fire.

Authorities have ordered evacuations due to a fire in a Northern California county known for its wine.

Cal Fire said the fire started Saturday afternoon and about 100 acres have been affected in the Lake Berryessa area of Napa County.

The Napa Valley Register reports three homes may have been destroyed.

The newspaper reports about 80 homes are being evacuated.

Authorities say they have made an arrest related to looting in Northern California neighborhoods evacuated because of a deadly wildfire.

Shasta County Sheriff Tom Bosenko told anxious residents at a community meeting Saturday that authorities had collared a parolee and he was going to jail.

Residents cheered and did so again later when Redding Police Chief Roger Moore said his officers had leads on other suspects.

More than 38,000 people have been displaced since the blaze started Monday. At least three civilians and two firefighters have been killed.

Authorities say they are investigating reports of looting in Northern California neighborhoods that were evacuated because of a deadly wildfire and that officials have identified several suspects.

Moore said Saturday no arrests have been made.

He says more than 100 officers and 260 National Guard soldiers are helping with evacuations and providing security in the empty neighborhoods.

Bosenko says more than 38,000 have been displaced since the blaze started Monday. At least three civilians and two firefighters have been killed.

A bulldozer operator killed when he was overtaken by a massive blaze in Northern California has been identified.

The Shasta County Sheriff's Office said Saturday the bulldozer operator helping to clear vegetation in the wildfire's path has been identified as 81-year-old Don Smith of Pollock Pines, California.

California fire officials said Smith and his equipment had been hired privately. His body was found late Thursday in Redding.

A Redding firefighter was also killed fighting the blaze that started Monday.

Family members of three people missing said Saturday they have been confirmed dead.

Sherry Bledsoe says that her grandmother, 70-year-old Melody Bledsoe, and her children, 5-year-old James Roberts and 4-year-old Emily Roberts, died in the fire near Redding.

Sherry Bledsoe said Saturday that her two children and her grandmother died in the fire near Redding.

The fatalities bring the death toll to five since the massive blaze started burning Monday about 100 miles (161 kilometers) south of the Oregon border.

The dead were identified as 70-year-old Melody Bledsoe and her great-grandchildren, 5-year-old James Roberts and 4-year-old Emily Roberts.

Family members had been desperately looking for them since flames leveled the home where they were stranded on Thursday.

Bledsoe's husband was out getting supplies at the store when the boy called him and said he needed to get home because the fire was approaching.

Police in a Northern California city say they have been unable to locate 14 people, including a 70-year-old woman and her young great-grandchildren, amid a raging wildfire.

Redding Police Sgt. Todd Cogle said he expects most of the 14 to be safe since their homes survived the Shasta County wildfire. He says some may be having communication issues.

Cogle said he could not comment on Melody Bledsoe and 5-year-old James Roberts and 4-year-old Emily Roberts, who remain missing. He said the Shasta County Sheriff's Office is investigating.

Police have surrounded the Bledsoe property with crime scene tape.

An investigator Saturday wouldn't say if any remains had been found.

The wildfire that started Monday has displaced at least 37,000 people.

A shelter for people displaced by a massive blaze in Northern California has reached full capacity as fire authorities order more evacuations.

Peter Griggs, a spokesman for Shasta College in Redding, says the evacuation center at the school reached maximum capacity Saturday and is housing 500 people.

The college's gymnasium is filled with cots and American Red Cross volunteers are providing food, water and medical and mental health services.

The raging fire that started Monday has displaced at least 37,000 people.

Police have surrounded a burned-out property with crime scene tape where two children and their great-grandmother are unaccounted for after a Northern California wildfire destroyed their home.

An investigator Saturday wouldn't say if any remains had been found, but police closed off the road to the house. Family members have been desperately seeking 70-year-old Melody Bledsoe and two of her great-grandchildren who lived with her at the Quartz Hill Road home in Redding.

Jason Decker, a boyfriend of a relative, says that Bledsoe's husband, Ed, was at the store Thursday when his 5-year-old grandson, James Roberts, called to say he needed to come right home because the fire was close.

Decker says that when Ed Bledsoe tried to drive home, police wouldn't let him through a roadblock because the fire was raging.

Decker says Melody, the boy and his 4-year-old sister, Emily Roberts, are all missing.

The declaration highlights a massive wildfire in Northern California that nearly doubled overnight.

California fire officials say more than 10,000 firefighters are working to stop the progress of 14 large wildfires across the state.

They say the blazes have killed three firefighters and destroyed more than 500 structures.

The blazes that began Friday are burning about 120 miles (200 kilometers) southwest of Redding, California, which is near a massive wildfire that as thousands of under evacuation orders.

The Mendocino County Sheriff's Office says mandatory evacuations are in place for people living an area north of Highway 175 near Hopland, California.

They say the blazes are threatening more than 350 buildings.

This item has been corrected to show blaze is burning near Hopland, not Ukiah, California.

Officials say a deadly blaze in Northern California almost doubled in size overnight, but is moving away from populated areas.

Anthony says winds are fueling the fire but also pushing it away from Redding, a city of 90,000, and other populated areas. Thousands of people remain under evacuation orders, including the small towns of Ono and Igo.

The explosive wildfire in Northern California has killed two firefighters and destroyed 500 buildings. Another 5,000 buildings remain under threat.

A wildfire in far northern California has destroyed at least 500 structures and remains mostly uncontained. The air chokes with the smell of smoke and chemicals. The smoldering remains are still too hot to sift through. And the weather report promises more hot dry conditions, bad news for firefighters working the so-called Carr Fire.

The wildfire has wiped out the small community of Keswick, swept through the historic Gold Rush town of Shasta and hit homes in Redding. Nearly 5,000 more homes are threatened, and about 37,000 people remain under evacuation orders.

Two firefighters were killed as the flames roared through. Other large fires are burning outside Yosemite National Park and in the San Jacinto Mountains. The National Interagency Fire Center is tracking 89 active large fires in 14 states.