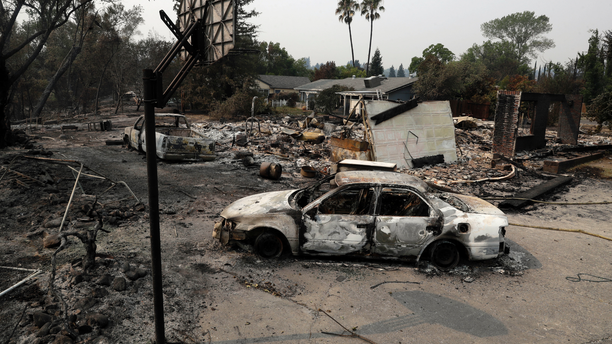 The Latest on fires in California (all times local):

Authorities say a massive blaze in Northern California has destroyed more than 650 homes since it broke out July 23.

The fire exploded on Thursday and took out neighborhoods in Redding, a city about 230 miles north of San Francisco. However, officials say the blaze has slowed down and they expect containment numbers to grow.

The deadly wildfire has forced tens of thousands of people to flee their homes. It has also killed two firefighters and two children and their great-grandmother.

Authorities say a firefighter battling a massive blaze near California's Yosemite National Park died after he was struck by a falling tree.

National parks officials say 33-year-old Brian Hughes died Sunday near the fire line. A statement says Hughes was part of a crew removing brush and other fuel in an area with many dead trees.

Hughes, originally from Hawaii, had been with California's Arrowhead Interagency Hotshots for four years and reached the rank of captain.

He's the second firefighter killed battling the flames near Yosemite. Earlier this month, Braden Varney was killed when the bulldozer he was operating overturned. At least seven other firefighters have been injured since the blaze broke out July 13.

Some evacuations have been lifted but officials say Yosemite Valley will remain closed until August 3.

Evacuation orders have been lifted for several Southern California mountain communities as crews slowly get a handle on a destructive wildfire.

Zach Behrens, spokesman for the San Bernardino National Forest, said Sunday that "substantial progress" has been made on the so-called Cranston Fire east of Los Angeles near Palm Springs. The fire is about 30 percent contained.

A 32-year-old man has been charged with intentionally starting the blaze that destroyed at least five homes.

Officials warn that risks remain in and around the town of Idyllwild in the San Jacinto Mountains.

Residents returning home are warned that many roads in the area remain closed.

Mike Theune, a spokesman for the so-called Ferguson Fire, says the firefighter was treated for injuries at the scene Sunday but died before he could be hospitalized.

Theune says the firefighter was part of a crew removing brush and other fuel near the fire's front lines. He didn't have additional details.

Earlier this month, firefighter Braden Varney was killed when the bulldozer he was operating overturned. At least seven other firefighters have been injured since the blaze broke out July 13.

Some evacuations have been lifted but officials say Yosemite Valley, the heart of tourism in the park will remain closed until August 3.

Officials have ordered the town of Lakeport in Northern California to evacuate as a wildfire moves toward the Lake County recreation area.

Lake County Sheriff's Lt. Corey Paulich says the order Sunday brings the number of evacuations in Lake County to about 7,500, up from the previous 2,500.

Paulich says the warm afternoon temperatures have sparked up fire activity and the so-called Mendocino Complex fires continue to move toward the Lakeport area. Lakeport is about 120 miles north of San Francisco.

Meanwhile, fire officials say crews made good progress on the Carr Fire near Redding, which has killed six people and destroyed more than 500 buildings.

Fire officials say crews have stopped some of the growth of a Northern California blaze that has killed six people and destroyed more than 500 buildings.

California Department of Forestry and Fire Protection Incident Commander Bret Gouvea said Sunday firefighters were gaining some ground on the blaze, as opposed to being strictly in a defensive posture.

The fire exploded on Thursday and took out neighborhoods in Redding, a city about 230 miles (370 kilometers) north of San Francisco.

Gouvea said the fire is not moving nearly as fast as it did earlier. He said he is optimistic and expected containment numbers to increase.

A Northern California sheriff says a sixth person has died in a raging wildfire that has destroyed more than 500 buildings.

Shasta County Sheriff Tom Bosenko said Sunday that the remains were found within the boundary of the Carr Fire near Redding, about 230 miles (370 kilometers) north of San Francisco.

He said the victim, who was not identified, didn't evacuate despite receiving an evacuation warning.

The fire has also claimed the lives of two firefighters and two children and their great-grandmother.

Eight-one-year-old Don Ray Smith was a bulldozer operator who was helping clear vegetation in the path of the wildfire when he died. Redding Fire Inspector Jeremy Stoke was also killed, though no details were provided.

The other three victims — 70-year-old Melody Bledsoe and her two great-grandchildren, 5-year-old James Roberts and 4-year-old Emily Roberts — died when walls of flames swept through the family's rural property on the outskirts of Redding.

A police chief whose home was destroyed when fire tore through his Northern California city says he will continue to stay on duty.

Redding Police Chief Roger Moore told CNN on Sunday his father's home also burned in the blaze, but his family has good support.

Moore said property can be replaced, noting that the fire had also taken lives.

Five people have died in the blaze, including a woman and her two great-grandchildren.

The fire has destroyed more than 500 buildings and is threatening thousands more. Triple-digit temperatures and dry vegetation are making it difficult for crews to corral the blaze. It is only 5 percent contained.

Some evacuees from a deadly Northern California wildfire say they are frustrated because they don't know whether their homes are standing or were destroyed.

Authorities on Sunday had not reopened neighborhoods in Redding that were devastated by the flames.

Fed up, Tim Bollman, hiked 4 miles (6.4 kilometers) up steep terrain to check on the home he built for his wife and two sons 13 years ago.

Bollman took hundreds of photos, recorded video, texted his wife and hiked out.

California fire officials say wildfires around the state have forced roughly 50,000 people from their homes.

She said the state has experienced considerably more fire activity so far this year than it did over the same period of time last year, and the worst part of the fire season was still to come.

A fire in the Redding area about 230 miles (370 kilometers) north of San Francisco has claimed five lives and destroyed more than 500 buildings while charring 139 square miles (360 square kilometers).

Crews are getting control of a small wildfire in California's wine country county of Napa, but two blazes farther north are raging mostly unchecked.

The California Department of Forestry and Fire Protection said the blaze around Lake Berryessa in Napa County that destroyed seven structures was 50 percent contained as of Sunday morning.

The fire broke out a day earlier and forced evacuations. It has burned 150 acres (61 hectares).

Cal Fire spokeswoman Tricia Austin said Sunday the blazes were each 5 percent contained. The fires have forced evacuations and are threatening more than 4,500 structures.

Fire officials say a deadly Northern California wildfire that has destroyed more than 500 buildings and is threatening thousands more did not grow as dramatically overnight, though crews are still struggling to corral it.

Romero said there are still many uncertainties that could cause the fire to explode. Crews have been dealing with gusty winds and hot temperatures.

A vehicle problem ignited the fire Monday, but it wasn't until Thursday that the fire exploded and raced into communities west of Redding before entering city limits.

The fire has left five people dead, including a 70-year-old woman and her two young great-grandchildren. It has destroyed 517 buildings and damaged another 135. More than 5,000 structures are threatened and tens of thousands of people are under evacuation orders.

A deadly Northern California wildfire has destroyed more than 500 buildings and is threatening thousands more as it rages into its fourth day.

The fire in the Redding area has left five people dead, including a 70-year-old woman and her two young great-grandchildren.

About 38,000 people remained under evacuation orders Saturday and are staying with relatives or in hotels or shelters.

Anna Noland, who was evacuated twice in three days, learned Friday that she had lost her home. She says it's hard to believe.

A vehicle problem ignited the fire Monday, but it wasn't until Thursday that the fire exploded and raced into communities west of Redding before entering city limits.

It was pushing southwest of Redding on Saturday, toward the tiny communities of Ono, Igo and Gas Point.