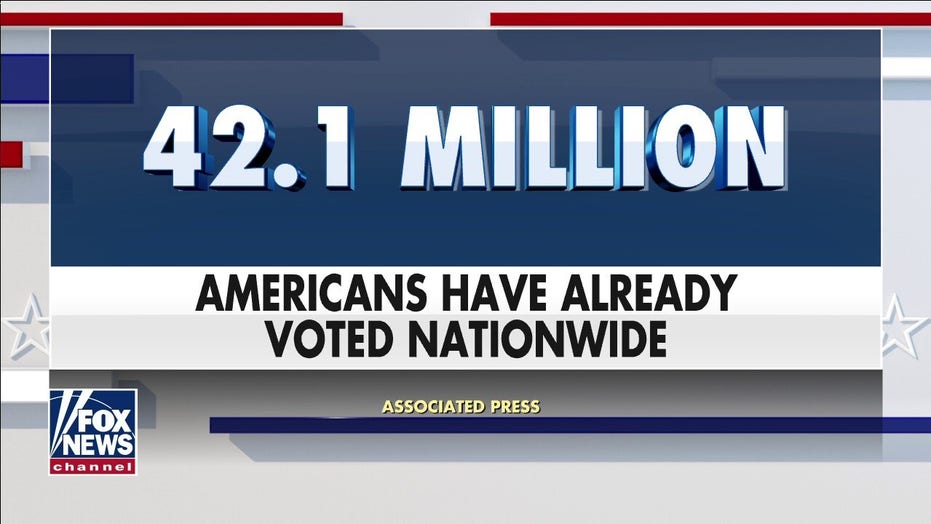 Voters across US shatter early-voting records

The Texas Supreme Court rejected a challenge from the state Republican Party to halt drive-thru voting Thursday, which started earlier this year in Harris County as a socially distanced way to vote amid the coronavirus pandemic.

Harris County currently has 10 drive-thru polling places that give citizens a "safer, socially-distant alternative to walk-in voting for all voters."

"Harris County is the first jurisdiction in Texas history to create this new method of voting at scale that allows any registered voter to cast their ballot without leaving the comfort of their vehicle," the county Harris County Clerk Chris Hollins explains.

“We are perplexed by the Supreme Court of Texas’s decision today," a spokesman for the state's Republican Party told Fox News. "However, this whole situation would have been avoided if the unelected, partisan, Chris Hollins, had not abused his position as county clerk of Harris County to manipulate the election process and undermine electoral integrity.”

Texas Attorney General Ken Paxton, a Republican, agreed with the Texas GOP, saying in a letter to election officials last Friday that according to the state's election code, poll workers, "may provide a ballot to a registered voter 'at the polling place entrance or curb' only if the voter is 'physically unable to enter the polling place without personal assistance or likelihood of injuring the voter's health.'"

But an appeals court ruled last week that the Texas GOP does not have standing, particularly because the election is already underway. The court noted that Hollins announced on Sept. 10 that curbside voting would be an option for early voting and Election Day, but the state Republican Party waited until last week to file its lawsuit.

After the Texas Supreme Court also rejected the challenge Thursday, Hollins said the county "has provided its electorate with more voting access than ever before."

"Once again, the law is on our side. The Court's decision to uphold the legality of Drive-Thru Voting as a safe and convenient way to vote underscores that this November, democracy is on the ballot," Hollins said in a statement.

"Texas Election Code clearly allows for our ten drive-thru voting centers to serve as polling places, and my office consulted with the Texas Secretary of State as we developed our Drive-Thru Voting program."

Harris County is the largest county in Texas with 4.7 million people. The state is expected to shatter voting records this year as 5.7 million citizens already voted early, according to the U.S. Elections Project.