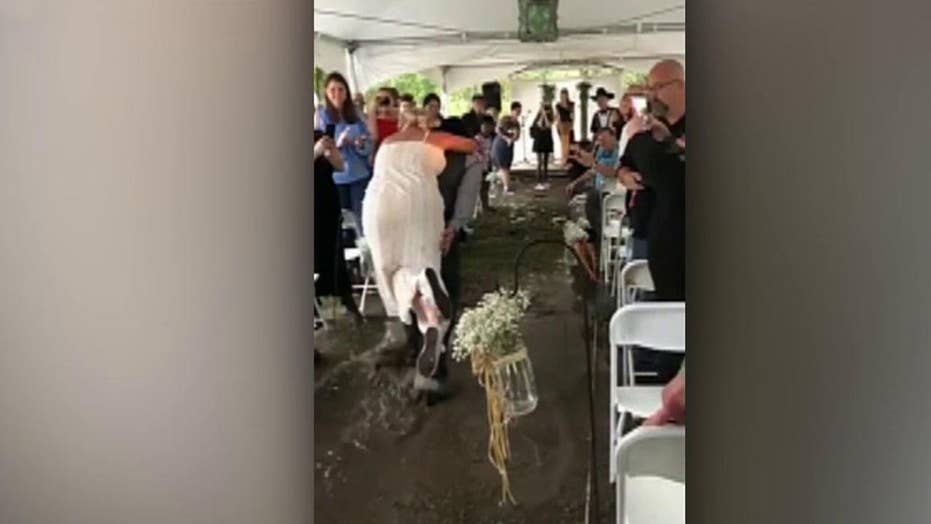 A little mud didn't stop a bride and groom in Texas from making their wedding dreams come true.

Twiz and Nicole Stanley, of Alvarado, a city roughly 30 miles south of Fort Worth, planned their wedding for two years before Mother Nature stepped in ahead of the big day, according to Fox 4.

The nuptials took place on their property in Hill County on Saturday. The National Weather Service confirmed two tornadoes touched down in the county the day of the wedding.

“Since Texas weather is so unpredictable at times we just kept our fingers crossed,” Nicole told the news station. “By the time we realized that the rain was going to remain in the forecast there was nothing we could really do to change our plans or move to another venue or anything.”

Several tents the couple set up throughout the property had been lost because the rain was "catastrophic," but one tent remained.

Twiz and his friends tried to clean up the area, and, after the wedding, Nicole learned "there were about 15 guys under the main tent trying to scoop water out of the aisle so none of us ladies would have to walk through it. I had no idea how much it had rained and how flooded everything was until I walked out of the limo down the aisle with my mom and dad and saw it."

MEGHAN TRAINOR IS 'TEXTING PEOPLE' TO COME TO HER WEDDING

Video captured by one of their guests showed Twiz giving Nicole a piggy-back ride down the flooded and muddy aisle.

“My heart almost burst out of my chest,” Nicole said. “He’s always been my best friend and he’s always rescued me in so many ways but that day and that moment he was truly my knight in shining armor, my hero.”

The couple, who plans to honeymoon in New Orleans, Louisiana, said while there's no rain in the forecast, they now know they "can weather any storm."