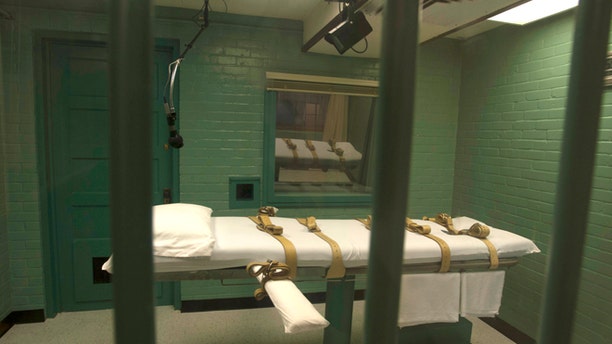 Sept. 29, 2010: The death chamber is seen through the steel bars from the viewing room at the state penitentiary in Huntsville, Texas. (Reuters)

Texas prison officials are helping Virginia carry out a scheduled execution next week by providing that state with the lethal drug pentobarbital that corrections agencies nationwide have had difficulty obtaining.

The disclosure, confirmed Friday by the Texas Department of Criminal Justice, has surfaced in court documents in an Oklahoma death penalty case.

Lawyers for Oklahoma inmate Richard Glossip also said in a federal court filing Thursday that Texas is "compounding or producing pentobarbital within its department for use in executions."

Texas prisons spokesman Jason Clark said the Texas agency gave Virginia three vials of the drug, but said the state does not have a license to manufacture its own pharmaceuticals. He said Virginia provided Texas with a backup pentobarbital supply in 2013.