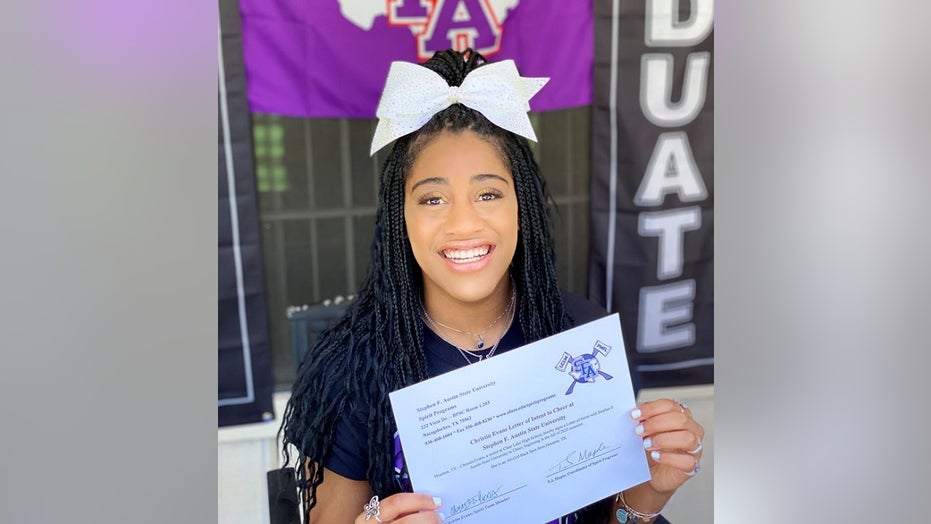 A Texas college cheerleader said she was the victim of a "swatting" incident when as many as 10 mostly White students filed a false report with campus police alleging she made violent threats.

Christin Evans, a 17-year-old freshman at Stephen F. Austin University in Nacogdoches, said officers barged into her room at 3 a.m. on Sept. 14 while she was sleeping.

"I feel shaken," said Evans, who is Black, said during a Monday news conference alongside her parents and attorney. "I can't sleep at night. It has made me paranoid. I was looking forward to making friends and having a good time on the cheer team."

Police officers said they received a report that she was threatening to stab students with scissors.

Kallinen said his client's three White roommates and seven other students targeted her for a "swatting" prank, the filing of a false report to prompt law enforcement, including SWAT officers, to converge on someone's home.

“This could have been a Breonna Taylor circumstance,” Kallinen told reporters Monday, referencing the 26-year-old Black EMT who was killed by Louisville police in March during a botched drug raid. “They had falsely accused Christin of having scissors and trying to stab people.”

Evans' father, Chris Evans, told reporters he was upset about the ordeal.

"Yes, we're upset and we want something to be done about it," he said. "When I sent my daughter off to school, my worse-case scenario was that she should call needing money or an issue with her grades."

SFA Police Chief John Fields said an investigation has been opened into the matter.

"The university is investigating a racially diverse group of students in an incident involving a false report to the university police department," Fields said in a video message. "The students will be held accountable for their actions at every possible level."

In a statement, university President Scott Gordon said his "heart goes out to the young lady who was an innocent victim."

Kallinen said he is looking for the school to discipline the students and for the local district attorney to file criminal charges for filing a false report.