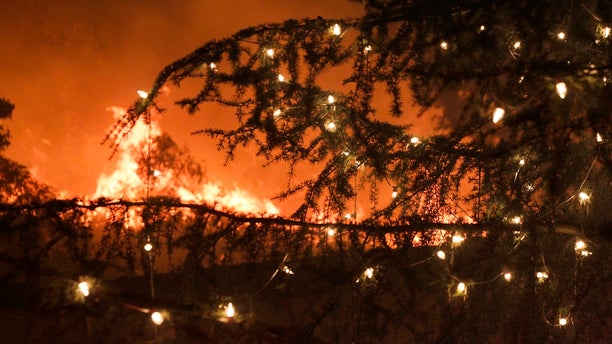 A Tennessee family's home caught on fire after leaving Christmas lights on all night. (Associated Press)

A Tennessee couple's Christmas went up in flames this week when their holiday lights set their house on fire.

Huckaby told the station that she, her partner and a guest were sleeping when the blaze started.

“It is the most terrifying thing to be woken up to a fire on your home,” Mary Morrison, Huckaby’s partner, told Fox 13 Memphis.

After they realized what was happening, Morrison rushed outside to control the fire, Fox 17 Nashville reported.

“Our guest that was staying with us yelled, ‘Fire! Fire!’ and then you grabbed the fire extinguisher,” Morrison told thre station.

All the Christmas lights were new, Morrison said.

“Our mistake was leaving them on 24/7. We thought because it was only one strand of lights and weren’t overloading an outlet, we would be OK,” she told Fox 13.

"Our mistake was leaving them on 24/7. We thought because it was only one strand of lights and weren’t overloading an outlet, we would be OK."

Morrison told Fox 17 Nashville some safety tips she learned from her sparks-filled experience.

“Unplug your lights at night and always have fire extinguisher and make sure they’re up to date and change our batteries on your smoke detector," she said.

Tony Scott, the Columbia Fire Department's assistant chief, told Fox 17 Nashville that homeowners should also check for breaks in the wiring and “bulbs that are shot are replaced.”

"If you’re decorating in the yard, is the grass really dry where you’re putting these lights?” Scott said. “You want to be aware of that and also the type of light. The LED light isn’t going to get as hot as a regular standard light bulb."

The couple told Fox 17 Nashville they are glad they are safe and still have their home.

"You always hear about it, but you don’t think this would happen," they said.