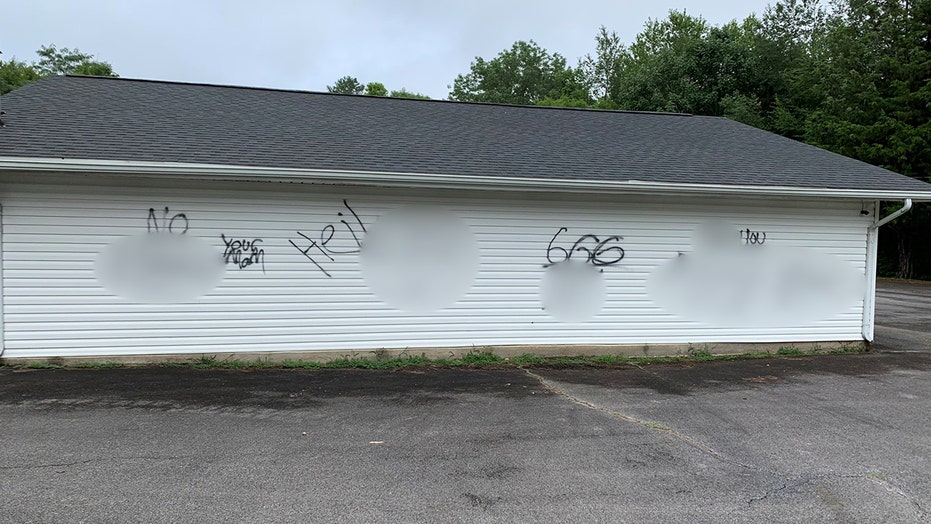 Deputies in Tennessee are investigating after racial slurs and graphic images of male genitalia were spray-painted on a church this week.

Pastor James Mitchell of Napier Pentecostal Church in Hohenwald, Tenn., about 60 miles southwest of Nashville, told Fox News that he discovered the graffiti when he arrived at the church on Wednesday afternoon.

Mitchell said swastikas, explicit images of male genitalia, racial slurs and other phrases had been spray-painted on the outside of the building.

Tennessee deputies are investigating after racial slurs and graphic images of male genitalia were spray-painted on a church. (James Mitchell)

“Written on our back door was ‘there is no God’ and below that they wrote the letter ‘U’ with a heart below that and below that was a male genitalia drawing,” Mitchell said, describing some of the vandalism.

Mitchell told Fox News that when he discovered the vandalism he was, “a little broken-hearted that someone would do something like that to a church, especially ours.”

“I kind of never thought that I would be the pastor of a church that somebody took out their frustrations and aggravations through vandalism and writings, the type of things that they did," he added.

Pastor James Mitchell of Napier Pentecostal Church in Hohenwald, Tenn., which is about an hour and half southwest of Nashville, told Fox News that when he arrived at the church on Wednesday afternoon he discovered the graffiti. (James Mitchell)

Mitchell said he contacted the Lewis County Sheriff’s Department immediately and once investigators documented the graffiti, he started to remove it from the building with the help of church members and nearby campers.

The Lewis County Sheriff’s Department confirmed to Fox News that they are investigating the case.

Mitchell said authorities asked him if anyone was upset with the church or if he had received any threats recently.

“I personally couldn’t think of anybody that would be that upset with us for any reason to write what they wrote,” Mitchell said.

He told Fox News that the church has surveillance cameras and he watched the footage.

Pastor James Mitchell of Napier Pentecostal Church said he believes a young person is responsible “because it is summertime and teenagers can get bored” and due to misspellings as well as the type of insults that were spray-painted on the building. (James Mitchell)

“Whoever did it is must have been able to scope the location out first because the first thing the person did was spray paint the camera,” Mitchell told Fox News. "So I wasn’t able to catch the person on camera."

Mitchell said he believes a young person is responsible “because it is summertime and teenagers can get bored.” He also cited misspellings as well as the type of insults that were spray-painted on the building.

“I’m just praying and hoping that whoever did it, that they don’t allow that type of hate and mindset to allow their future to be dictated by it,” Mitchell said. "If it is a young person, their future could be so much better if they don’t get tied up in that kind of ideology."

Mitchell told Fox News he does not plan on pressing charges.

“I am just praying that they realize what they did was wrong,” he said.