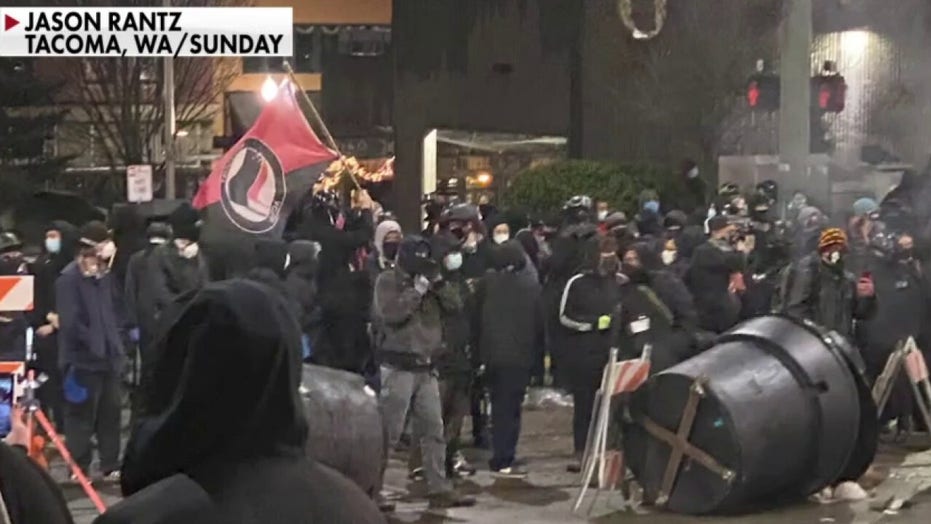 Tacoma riot eyewitness describes violence, vandalism: 'It was as bad as you might expect'

A Seattle talk radio host who went inside Sunday night's riot in Tacoma, Washington, tells Fox News that Antifa made their role in the violence loud and clear.

"I saw what we've been seeing for the past eight months, which is a group of mostly Seattle-based folks and some Portland-based folks from Antifa showing up to Tacoma to sort of take control of the neighborhood, despite lots of locals and Tacoma saying we don't want you here," KTTH Radio's Jason Rantz told "The Faulkner Focus" Wednesday.

"Not only were they flying an Antifa flag, they chanted 'Antifa.' That's what they do. They make it very, very easy to identify themselves."

JASON RANTZ: I WAS INSIDE ANTIFA RIOTS IN TACOMA -- THIS IS WHAT I SAW

Rantz says he witnessed fires, vandalism, burning of the American flag, and the taunting of police.

"They tried to break prisoners out of the local jail by trying to pull down the fencing," he said. "It was as bad as you might expect. This is not the same as some of the protests associated with the Black Lives Matter movement and some of the other movements that are critical of police. This is a very specific type of protest that turns very quickly into criminal actions."

Rantz predicted the violence will continue without police intervention until it dies down on its own.

"The city basically allows it to happen until it peters out, and that's when police are able to go in," he said.