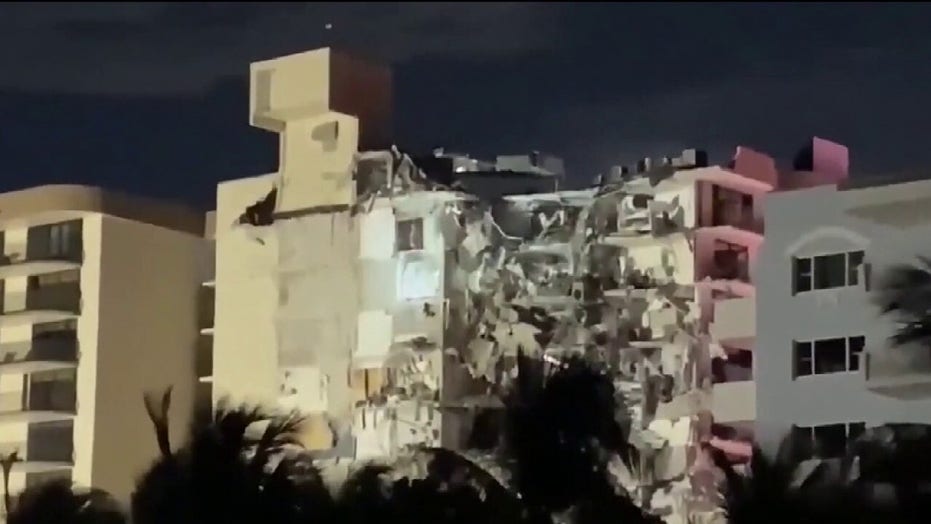 Fox News correspondent Phil Keating has the latest on the rescue efforts in Surfside, Florida, on 'Special Report'

The Champlain Towers condo association manager complained just days before the June 24 collapse that delays by the city of Surfside, Florida's building department were "holding us up" from making needed repairs on the building, emails show, according to a report.

"We need to get to answers to these questions," Scott Stewart, the condo’s building manager, wrote June 21.

Surfside’s building department failed to respond to the condo association’s request to approve a temporary parking plan for construction for more than a month, the emails show, according to the Miami Herald.

The director of the building department, Jim McGuinness, replied June 23 with a series of questions just 14 hours before the building collapsed, according to the Herald. His email went unanswered.

McGuinness had reportedly also been on the roof of the building documenting repairs the day before the collapse and later said, "There was no inordinate amount of equipment or materials or anything on that roof that caught my building official’s eye that would make it alarming as to this place collapsing," he said, according to The Palm Beach Post.

BUILDING INSPECTOR WAS ON ROOF OF FLORIDA CONDO HOURS BEFORE COLLAPSE

The planned repairs included a concrete slab under the pool deck and planters that experts have linked to the collapse, the Herald reported.

An oceanfront condo building that partially collapsed, resulting in fatalities and many people still unaccounted for, is seen in Surfside, Florida, June 27, 2021. (Associated Press)

After the collapse, the city released documents that showed a number of safety issues flagged ahead of the building’s required 40-year inspection.

A 2018 report by Morabito Consultants, Inc., which examined the complex, did not indicate any risk of collapse, but it did note the need for repairs to maintain the "structural integrity" of the building.

The report noted a number of issues, citing previous complaints of flooding "during a hurricane event," possible structural damage to balconies and cracks in the concrete of unit balconies.

The company assessed the building needed millions of dollars in necessary repairs, the Herald reported.

After a week of unanswered emails in May, engineer Frank Morabito and condo board members reportedly finally got a meeting with building department officials to discuss the repairs.

In an email a week later that went unanswered for a month, Morabito asked the city to make space for construction crews so the repairs could get started.

"It is [Champlain Tower South’s] desire to go out to bid for our 40-year recertification work ASAP and need the Town of Surfside input on this request so everyone has a clear understanding on how this project will be accomplished. As such, we respectfully request that we hear from the Town in the near future so we can make any necessary revisions to our contract drawings and submit same to the Town for permit review/approval," Morabito wrote.

Scott Stewart, the condo’s building manager, then followed up a month later on June 21, three days before the collapse, writing, "We need to get to answers to these questions."

"We have been trying to move forward with getting the needed documents completed for our 40 year so we can hit the ground running when we are able to start work," he wrote after Prieto had claimed the condo was in "good shape" despite the Morabito report, the Herald reported.

The death toll in the rescue operation rose to 22 on Friday, officials said, with 126 still missing.