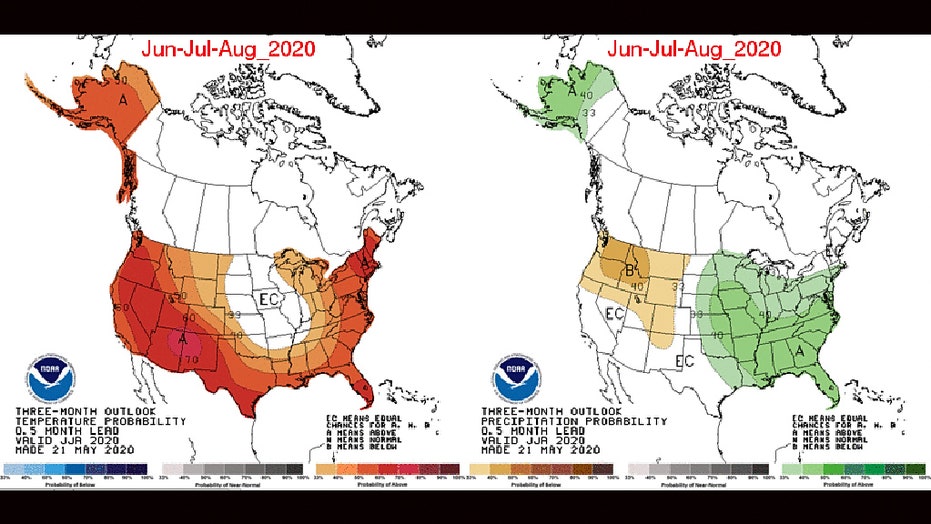 National forecast for Tuesday, May 26

The heat looks to be on for this upcoming summer.

According to a recent forecast outlook by the National Oceanic and Atmospheric Administration (NOAA), above-normal temperatures are likely for June, July and August across the West, Gulf Coast states, and along the East Coast.

"The largest probabilities (above 70 percent) of above normal temperatures are centered over the Four Corners region," the Climate Prediction Center (CPC) said Thursday in an outlook.

While warmer temperatures can be expected along the coasts and out West, more seasonable conditions are expected in the nation's midsection. Forecasters said that it looks like much of the central and Northern Plains into the Midwest will have normal temperatures this summer.

Above-normal temperatures are expected out West, along the Gulf Coast, and the East from June to August 2020. Above-normal precipitation is also forecast for the Midwest into the East. (Fox News)

In terms of precipitation, the NOAA outlook from Thursday said that there are increased chances of above-normal precipitation for much of the eastern and central U.S.

Areas in the Pacific Northwest into the northern Great Basin and much of the Rockies, however, are expected to see below-normal precipitation this summer, which may help to fuel conditions for wildfires in the months ahead.

"During the late summer and early fall season, increased chances of above normal temperatures expand to include the entirety of the continental U.S. (CONUS) with the largest probabilities remaining over the Southwest," the CPC said.

A warm summer also appears to be in the forecast for Alaska, where forecasters said that above-normal temperatures are favored throughout the state during the three-month period.

There also are increased chances for above-normal precipitation for most of mainland Alaska during this summer, according to the CPC.

The outlook was released the same day that forecasters from NOAA said there's a 60 percent chance of an above-normal hurricane season, which officially starts June 1 and runs until Nov. 30.