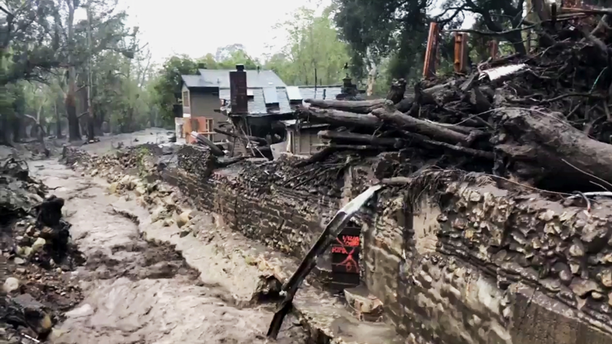 A strong Pacific storm dropped record-breaking rain Wednesday on a swath of California evacuated by thousands of people over threats of debris flows and mudslides from wildfire burn areas.

The storm came ashore on the central coast and spread south into the Los Angeles region and north through San Francisco Bay, fed by a long plume of subtropical moisture called an atmospheric river.

It also moved eastward, bringing the threat of flooding to the San Joaquin Valley and Sierra Nevada, where winter storm warnings for new snow were in effect on the second day of spring.

Record rainfall was recorded in five spots including Santa Barbara, Palmdale and Oxnard, where nearly 1.8 inches of rain had fallen by Wednesday evening. That's compared to the record of 1.3 inches set in 1937.

Authorities kept a close watch on Santa Barbara County, hoping there would not be a repeat of the massive January debris flows from a burn scar that ravaged the community of Montecito and killed 21 people.

"Right now it looks like the storm will enter its most threatening period Thursday morning," the National Weather Service said, adding there could be a nine-hour period of moderate to heavy rain.

Mud and rockslides closed several roads in the region, including Highway 1 at Ragged Point near Big Sur, not far from where the scenic coast route is still blocked by a massive landslide triggered by a storm last year.

A large pine tree was felled in Los Angeles, landing across a residential street into a picket fence. No one was hurt.

Carolyn Potter, 59, evacuated from her home in Casitas Springs in Ventura County on Tuesday, but returned the same day when no rain materialized in her neighborhood.

"I thought, 'This is silly. I'm going to go home and get something done," she said.

Potter evacuated again when she woke up to rain Wednesday morning and plans to sleep in her car in a grocery store parking lot to avoid hotel costs and the bustle of an evacuation shelter.

Meanwhile her husband Alan is staying home, just like he has the other three times Potter has evacuated because of fires or storms since September.

"If something happens maybe I'll zip on down and dig him out," Potter said.

With the storm expected to last through Thursday, there was concern about the combination of rainfall rates and the long duration, Suzanne Grimmesey said, a spokeswoman for Santa Barbara County.

With the grim Montecito experience in recent memory, Santa Barbara County ordered evacuation of areas along its south coast near areas burned by several wildfires dating back to 2016.

"We actually do feel good about the evacuation order," Grimmesey said. "Law enforcement was out in the extreme risk areas of Montecito yesterday knocking on doors. For those that were home, we had a very good cooperation rate with people leaving."

When sheriff's deputies told Kristine Sperling and her family they should evacuate their home because of the approaching storm in January, they didn't listen.

Sperling thought she, her husband and their 11-year-old daughter would be safe. Then the storm unleashed flash floods laden with giant boulders that blasted through town in the middle of the night, destroying or damaging hundreds of homes. A dear friend was among those killed.

"It's a matter of life and death," Sperling said from Santa Barbara, where her family was staying with friends after evacuating Tuesday.

Many residents in Santa Barbara and Ventura counties have faced repeated evacuations or advisories since December, when a wind-driven fire grew into the largest in recorded state history and destroyed more than 1,000 buildings.

Montecito resident Garrick Hyder evacuated for the December wildfire but not ahead of the January mudslides, which destroyed items in his garage including a motorcycle and thousands of dollars' worth of snowboarding and scuba-diving equipment.

Hyder watched as rescuers retrieved numerous bodies over several days from in front of his house.

Hyder evacuated four days after the mudslides and then again when another storm threatened the area a week ago.

"I'm on No. 4 now," Hyder said Tuesday as he packed his car. "It's pretty crazy. It's kind of the price of living in paradise."

In Los Angeles County, authorities canceled some planned mandatory evacuations because of a projected decrease in rainfall but kept others in place because of debris flows in one canyon area stripped bare by wildfire.