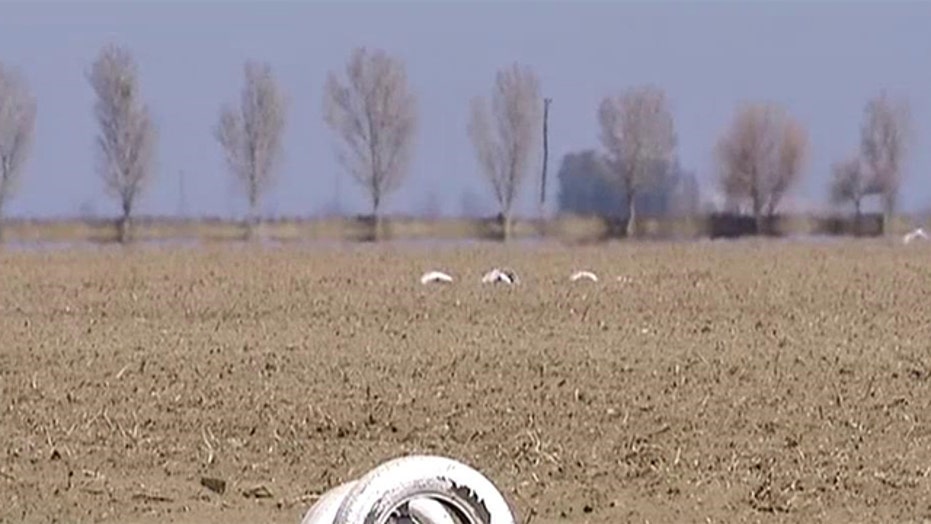 California hoping rain will bring some relief from drought

SACRAMENTO, Calif. – An unusually cold spring storm brought heavy rain and hail to parts of Northern California on Tuesday and coated the mountains in snow -- a welcome respite that will do little to ease the historic drought, forecasters say.

Up to 2 feet of snow could fall in the Sierra Nevada, according to the National Weather Service. Motorists are urged to use caution on mountain roads, where snow levels could reach 3,500 feet.

Hail was reported in parts of the San Francisco Bay Area, where wind advisories were in effect for four bridges, the California Highway Patrol said. Rainy weather slowed the region's commute and caused some wrecks.

In Daly City, south of San Francisco, at least one car was submerged in rainwater that was flooding Interstate 280 on-ramps. In Fremont, a tractor-trailer jack-knifed before sunrise, blocking northbound Interstate 680 for several hours.

But residents were glad to see the drops falling.

"We need it," said Becky Hlebasko of Marin County. The drought has her wondering what to do with her lawn, but she says, "Everybody has to do their part."

John Campos, who bikes partway from Marin County to a ferry that heads to San Francisco, prepared for the rain by bringing extra clothing.

"We need the rain, no doubt about it," the 43-year-old network engineer said.

A band of moderate precipitation brought rain measuring about 0.50 to 0.80 of an inch over Lake County, west of Sacramento, with higher amounts along the coast, the weather service said. Rain will push through the Central Valley on Tuesday morning and into the northern Sierra.

"It's a start, but it's just not enough," forecaster Diana Henderson said. "We have a rather large deficit to make up for. One or 2 inches around the Bay Area is just not going to do it."

The storm is expected to spread moderate rain down the Central Coast to the Los Angeles basin by Tuesday afternoon before dwindling early Wednesday.

In the Sierra Nevada, 6 to 12 inches of snow could fall around 4,000 feet, with 1 to 2 feet on higher peaks, forecasters say. The weather service issued a winter storm warning above 3,500 feet for heavy snow, which is in effect until 6 p.m. Tuesday.

The snowfall would be a big change from last week, when Gov. Jerry Brown stood in dry, brown grass at a site normally covered in snow this time of year and declared the drought conditions gripping the state at its worst point in decades. That same day, Brown ordered cities and towns to cut the state's overall water usage by 25 percent compared with 2013 levels.