State taking names of teachers who called in sick to protest 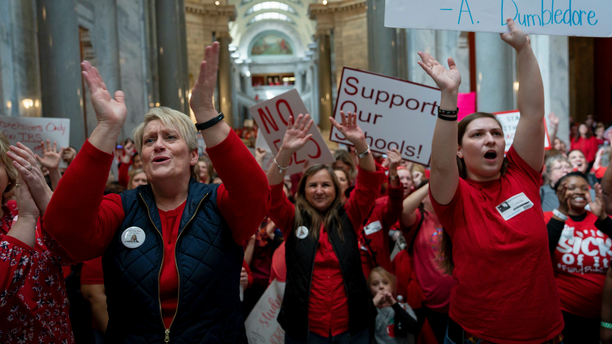 A group of the several hundred teachers gathered to protest perceived attacks on public education at the Capitol, in Frankfort, Ky, Tuesday, March 12, 2019. (AP Photo/Bryan Woolston)

Kentucky's education commissioner wants the name of every teacher who used a sick day to force 10 school districts to close so educators could protest at the state legislature.

At least 10 Kentucky school districts were forced to close several times since Feb. 28 after so many teachers used their sick days that officials could not find enough substitutes to cover classes.

Jefferson County Public Schools, one of the country's largest districts with more than 98,000 students, has closed six times in two weeks as hundreds of teachers packed the state Capitol to protest several proposals that impacted the pension system and education funding.

The protests are part of a wave of teacher activism across the country that began last year in West Virginia and quickly spread to other states, including Oklahoma and Arizona. This year, teachers in Los Angeles and Oakland, California, went on strike.

Kentucky teachers did not go on strike. But they used their sick days to close schools in protest of several education bills. They included a proposal to change who manages the teachers' pension fund as well as legislation that would have indirectly supported private schools with tax credits for scholarship funds.

On Thursday, Education Commissioner Wayne Lewis sent letters to 10 school districts, asking for the names of every teacher who used a sick day on the days the districts were forced to close. He also wanted copies of all affidavits and doctor's notes.

"The Kentucky Department of Education takes the closing of schools very seriously," Lewis said. "While it is important that administrators, teachers and students make their voices heard about issues related to public education policy, advocacy should under no circumstances be putting a stop to learning for entire communities."

Emilie Blanton, an English teacher at Southern High School in Jefferson County, said she did not use a sick day, but came to the Capitol to protest because the district was closed.

"I think it's an intimidation tactic," she said. "It just goes to show that they are going to try to silence the sick out movement as best as they can."

It's unclear what state education officials could do with the information. A news release from the Kentucky Department of Education notes state law allows the commissioner access to records of all teachers and has authority to report "mismanagement, violation of law, or misconduct to the Kentucky Board of Education."

The Kentucky Education Association, which represents 43,000 educators across the state, said in a news release that superintendents could discipline teachers who used sick days to come to the state Capitol "to exercise their First Amendment rights."

"It is our hope that they won't," the association said in a news release. "Making educators — who are all citizens of this Commonwealth — choose between keeping their livelihood and exercising their constitutional rights is despicable."