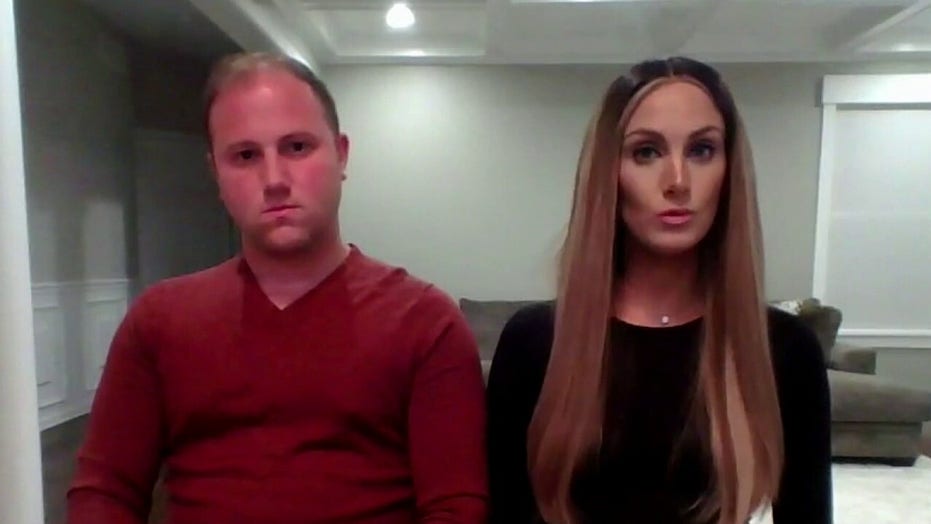 Spirit Airlines changed the wording of a tweet claiming a New Jersey couple failed to comply with its mask protocols after videos of them being kicked off a Monday flight appeared to show a flight attendant citing the couple's young children maskless on board.

The budget carrier initially said Ari and Avital Eisenberg, of Toms River, N.J., refused to follow a federal mandate that requires airline passengers to wear masks. The couple was with their children, -- Rikki, 2, and Daniel, 7, who has special needs -- after spending Passover in Florida.

"We are aware of incorrect information circulating about Spirit Airlines Flight 138 from Orlando to Atlantic City. The flight was delayed due to the adults in the party not complying with the federal mask requirement," the original airline statement said while noting the family and all the passengers were taken off the plane before being allowed to re-board.

The couple told Fox News in an exclusive interview that a flight attendant kicked them off the plane because Rikki was not complying with the airline's mask policy, which stipulates that passengers ages 2 and older must wear a mask. Avital Eisenberg, who is seven months pregnant, said she also explained that her son has frequent seizures and that covering his mouth can induce them and promised to do her best to make sure he kept the covering on.

"I told you, noncompliance — you'll have to get off. I didn't want to do this," says a flight attendant who was not the crew member who initially confronted the family.

"We're wearing masks," Avital Eisenberg says, according to video footage of the incident.

"She not wearing one," the flight crew member says of the 2-year-old sitting on her mother's lap eating yogurt. "The pilot wants you off."

After video footage showed flight crew members citing the maskless children for making the family deplane, the airline deleted a tweet with its original statement and issued a new one that omitted the word "adults."

"The flight was delayed due to compliance issues with the federal mask mandate," the altered sentence reads.

"I have no words. Next level craziness. I understand if I gave someone attitude…but there was none of that. We were about to take off," Ari Eisenberg told Fox News exclusively on Monday. "Everything was fine and all of the sudden someone comes over to us and asks us to deplane. We did comply they and nothing to say. I kept asking what didn’t we comply with they and nothing to say."

Avital Eisenberg called the experience "traumatic" for her children.

"My son missed his medication window. Thank God he didn’t have a seizure. He was sitting there in a soaking wet diaper because I couldn’t change him during the whole thing," she said. "My daughter is going crazy from all this it was a terrible terrible experience to go through let alone someone with a special needs child."

Spirit Airlines said it was sticking by its initial statement to Fox News, the company said.

It was first reported through several outlets that a male flight attendant who originally made the request was reportedly not allowed back on the flight and was seen being escorted off the plane by Orlando police officers. But Spirit Airlines told Fox News " There is also no truth to claims that police became involved with or removed a flight attendant. Orlando police have stated publicly that, though present at the gate, they did not take an active role in this situation."

The family was eventually allowed to re-board and made it home.