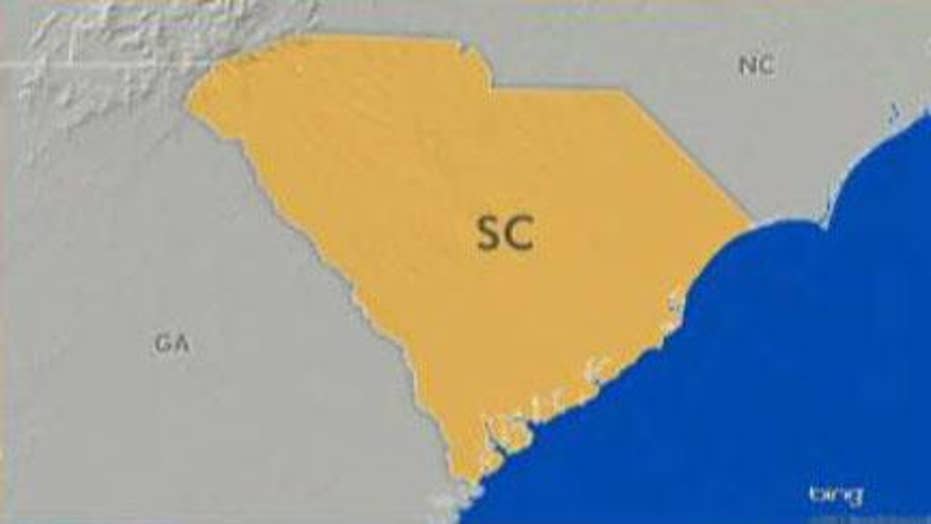 One police officer was killed and six other law enforcement officers were wounded in South Carolina on Wednesday after officials reported an "active shooter" situation in Florence.

The gunman had been holding an unknown number of children hostage, but all were released safely as the suspect was apprehended, Florence County Sheriff's Maj. Mike Nunn told the Associated Press.

The situation was considered so dangerous that police used a bulletproof vehicle to rescue the injured officers, the AP reported.

The chief said all of the injuries were thought to have resulted from gunfire. He said the department was assisting the sheriff's office in responding.

Officials initially tweeted about the situation around 5 p.m. ET, and warned people to "stay away from the area." The situation began around 4 p.m. when officers approached the home to serve a warrant for an unknown offense.

The officer who died was identified by The Associated Press as Officer Terrence Carraway. He was reportedly a 30-year veteran of the Florence Police Department.

Blood-soaked evidence lies on Saxon Drive in the Vintage Place neighborhood of Florence, S.C., where several members of law enforcement were shot, one fatally, Oct. 3, 2018.

President Trump tweeted that his "thoughts and prayers are with the Florence County Sheriff's Office and the Florence Police Department tonight." He added: "We are forever grateful for what our Law Enforcement Officers do 24/7/365."

South Carolina Gov. Henry McMaster called the shootings "simply devastating news," and asked for prayers for the officers, their familes and "all of Florence."

"The selfless acts of bravery from the men and women in law enforcement is real," the governor said, "just like the power of prayer is real."

"Heartbroken over the shooting involving the Florence area police officers," Sen. Lindsey Graham, R-S.C., tweeted. "God bless those who choose to protect us and their families."

Sen. Tim Scott, R-S.C., tweeted that his "prayers" were with the officers and their families.

"This is absolutely devastating," Rep. Tom Rice, R-S.C., tweeted. "We are staying updated and sending our prayers to the police officers and their families."

Authorities said the shooting in Florence, roughly 80 miles east of Columbia, occurred in Vintage Place, an upscale neighborhood in the western part of the city.

The area had already been reeling from the effects of Hurricane Florence, which caused extensive flooding in the state.

A police officer directs traffic on Hoffmeyer Road near the Vintage Place neighborhood of Florence, S.C., where three deputies and two city officers were shot Oct. 3, 2018.

It was the second shooting of multiple police officers in South Carolina this year. In January, a 47-year-old former banker shot four officers in York County, killing one, after his wife called 911 to report he beat her. Christian McCall pleaded guilty and was sentenced to life without parole.

Florence, a city in South Carolina's northeastern corner home to roughly 37,000, sits at the convergence of Interstates 95 and 20. It's the largest city in the region known as the Pee Dee, where flooding from Hurricane Florence devastated areas to the east and south.