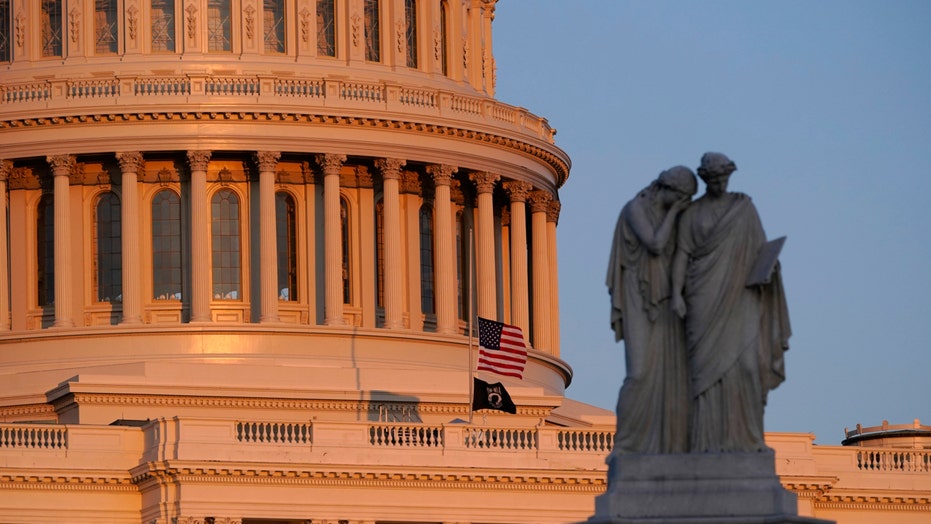 President Biden and members of Congress paid tribute to slain U.S. Capitol Police Officer William "Billy" Evans as he lies in honor at the Capitol Rotunda Tuesday, marking the second memorial ceremony this year for a fallen member of the department.

Evans, 41, was killed April 2 when a vehicle rammed into him and another officer at a barricade just 100 yards from the Senate side of the Capitol. The driver, 25-year-old Noah Green, stepped out of the car with a knife and was fatally shot by police. Investigators believe Green had been delusional and increasingly having suicidal thoughts. Green had identified himself in social media posts as a supporter of the Nation of Islam and its leader, Louis Farrakhan.

Members of the National Guard lined the street Tuesday and saluted as the hearse carrying Evans’ flag-draped casket entered the Capitol complex. His former colleagues gathered on the Capitol’s East Plaza Front while church bells rang in the distance. His family, including his two children, gathered to watch as his casket was carried up the Capitol steps and placed in the Capitol Rotunda.

Coming to the podium after Senate Majority Leader Chuck Schumer and House Speaker Nancy Pelosi both delivered remarks, President Biden gave an emotional tribute to the fallen officer, attempting to relate to Evans' relatives in their grief by recalling that he himself received news about the passing of members of his own family at the start of his career on Capitol Hill decades ago.

Biden said he began working on the Hill in the 1970s and has watched as so much strain has been placed on the shoulders of Capitol Police, yet officers continue on with their duty with "pure courage." The president also told Evans’ wife, Shannon, and his two children, Logan and Abigail, he knew how they felt and though it will take a while, things would get easier as time passes.

"I promise you it’s gonna come, takes a while," Biden said. "When it comes, you’ll know because he's still with you, still in your heart. It’s like losing a piece of your soul. It’s buried deep but it comes back."

Biden’s first wife, Neilia, and his young daughter, Naomi, died in a fatal car accident in 1972. Biden’s son, Beau, died in 2015 from brain cancer. The president told Evans’ wife to look to their two children to be reminded of Billy as they mourn his loss together.

"As long as you have them, you’ve got Billy," Biden said. "He’s still in your heart."

US CAPITOL SECURITY WORKED AGAINST ONE THREAT, BUT VULNERABILITIES REMAIN AGAINST A CROWD

"For everyone who works in the Senate, his loss is particularly painful," Schumer, D-N.Y., said on the Senate floor Monday, according to NPR. "He was a familiar face who greeted lawmakers, reporters, staffers and employees at the North entrance as we entered the Senate side of the building. Whether you knew him or not, his wide smile was often the first thing you'd see in the morning."

House Minority Leader Kevin McCarthy, R-Calif., issued a statement on Tuesday honoring Evans, describing the attack that killed the officer as one carried out by an "unhinged individual" on Good Friday that demonstrated "the definition of evil."

"On that Good Friday, he was the one of whom Jesus spoke when he said, ‘greater love has no one than this: to lay down one's life for one's friends,'" McCarthy wrote, referring to Evans. "Lying in honor in the Capitol Rotunda is the highest tribute Congress can pay to our nation’s heroes … Still, we feel the shock of his loss. We feel the pain. His loss is enormous.

"We thank our Capitol Police officers for their service and courage every day, and we pray for the full recovery of Officer Ken Shaver who was also injured in the line of duty on Good Friday," the House Minority Leader added. "Most of all, we remember Officer Evans today as a hero. And we can say of his legacy the highest praise: his calling was noble, his devotion complete."

While Evans is honored in Washington, D.C., on Tuesday, calls to defund police have been renewed across the country after the fatal officer-involved shooting of Daunte Wright on Sunday in Brooklyn Center, Minnesota.

The trial for former officer Derek Chauvin charged in George Floyd’s death continues in Minneapolis, just miles from where Wright was shot.

In addition to attending the tribute for Evans, Biden is also expected to meet with members of the Congressional Black Caucus on Tuesday.

"In giving his life to protect our Capitol and our Country, Officer Evans became a martyr for our democracy," Schumer and Pelosi, D-Calif., also said in a joint statement issued last week. "On behalf of the entire Congress, we are profoundly grateful ... May this tribute also be a source of comfort and an expression of gratitude to the U.S. Capitol Police force, which has awed our nation with their courage and resilience during this devastating time."

Officer Brian Sicknick died at the hospital after physically engaging with the rioters, and later collapsing when he returned to his division field office. His official cause of death has not been released. Two men were charged last month with assaulting Sicknick with bear spray.

Sicknick and Evans are two of only six Capitol Police officers who have been killed in the line of duty in the force’s nearly 200-year history, according to the department. Another officer, Howard Liebengood, died by suicide in the days after Jan. 6.

The three deaths in as many months have taken an unbearable toll on the force, which has been overworked and understaffed as leaders try to figure out how to move forward after the events on Jan. 6. In the weeks and months since, top leaders have resigned and many have considered leaving the department. Officials have brought in trauma therapists, and lawmakers are considering what more they can do.

"This is a group of men and women who’ve been through an overwhelming amount of trauma over the last few months," said Rep. Tim Ryan, D-Ohio, who heads a spending committee that oversees the Capitol Police and has been investigating the response to the insurrection. "The loss of Officer Evans is yet another stark reminder of what our brothers and sisters in uniform risk every day to protect us. The honor of lying in state under the Capitol dome is befitting of this American hero."

Evans, who has two young children and was an 18-year-veteran of the force, will be only the sixth person to lie in honor in the Capitol Rotunda, a designation for those who are not elected officials, judges or military leaders. He was remembered by colleagues and friends as a man with a sense of humor who loved baseball and golf. Members of his family said in a statement through the police earlier this month that most important in his life were his two children, Logan and Abigail.

"His most cherished moments were those spent with them — building with Lego, having lightsaber duels, playing board games, doing arts and crafts, and recently finishing the Harry Potter series," the family said. "He was always so eager to show how proud he was of everything they did."

The family said Evans was proud of his job and his friendship with colleagues near the "North Barricade" of the Capitol complex was one of the best parts of it.

"We hold them in our hearts, as we know they acutely share our grief," they said.

Also speaking on the Senate floor Monday evening, Sen. Dick Durbin, D-Ill., said that Evans was a "familiar and friendly face" at that barricade where he died, a gate that is frequently used by senators and staff. Durbin said the three deaths this year are an "incredible hardship" for the department and Congress owes them a debt that can never be repaid.

"Every day it is incumbent on those of us who work in this building to remember this officer, and to thank him, and the men and women of the U.S. Capitol Police who have given so much to keep us safe," Durbin said, according to The Associated Press.

Rep. Jennifer Wexton, D-Va., who represented Liebengood and has gotten to know his family since his suicide, has worked to find more mental health resources for the Capitol Police as they have worked extra shifts and dealt with the trauma of losing their colleagues. She said the current pace for the force is unsustainable.